The Selsey Range was originally established in May 1941 in response to requests by Commands for coastwise armament training areas and an area was marked of Selsey Bill (which was an extension of the old Littlehampton air gunnery range) and was known as the Selsey Bill air firing area (Training Area A.F. 26). It was operation from June 1941.

Subsequently, an addition to the Selsey Range was set up in the early part of 1943 as an air to ground range for use by squadrons at Tangmere (Training Area A.F. 26a).  Clearance to use the range was given for the duration of the war only.  In December 1943 it was decided to provide further facilities for low level and dive bombing practice within the same area and these facilities came into use in March 1944. In August 1944 the range was further extended for rocket projectile (RP) firing, which drew strong local protest.  The RP facilities came into use in November 1944.

It was not until December 1944 that live bombing facilities came into use and provision was made for the following layout:

This again drew strong local opposition, especially from the Catchment Board who feared damage to the River Rife banks. As a result, the RP targets were moved 500 yards further inland (May 1945). 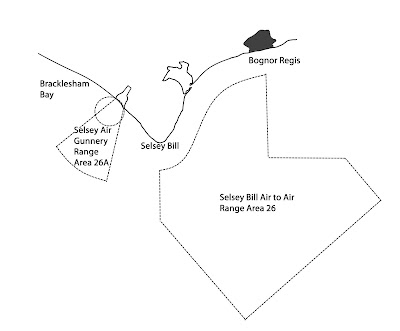 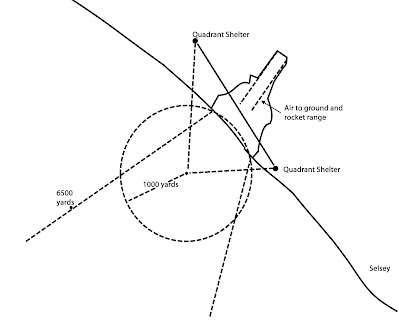 Above: The Selsey Range

The range ceased to be used from October 1945 when the units using it moved from Tangmere. In November 1946, it was proposed to resume training but in anticipation of strong local objections which could prejudice the retention of the range, the proposal was dropped in December 1946. The Air Ministry agreed not to resume training until formal approval was given.

The plan to continue use of Selsey air to ground and bombing ranges produced a lot of local objections. Locally, 10,000 signatures were obtained in protest against the proposals and several parliamentary questions were asked by Joynson Hicks, MP. Proposals required retaining the land requisitioned during the war under DR51 and the requisition/lease of a further 149 acres plus further small plots for quadrant shelters and flagstaffs (the existing quadrant shelters at Selsey Range were of timber hut and tubular scaffolding construction and if proposal to go-ahead given, more permanent shelters would be required) and for two dive screens.

A Public Inquiry – held at the Assembly Rooms, Chichester – formally opened at 10:30 am on Tuesday 13 July 1948 to discuss the Air Ministry’s proposals.

Air Ministry Case: It takes three years to train a pilot and training is vital ‘in maintaining the Royal Air Force in that high state of preparedness which is essential to the safety of the Country and the Empire’ and it was necessary to have facilities in which training could be carried out in the UK. Because of the large danger areas required for air gunnery training, it was impracticable to site ranges inland hence sea ranges usually chosen so as to minimise disturbance to agriculture and amenities inshore but some land ranges were essential so that results could be examined closely.  Ranges had to be close to aerodromes not least because of the possibility of rapid changes in weather but also because of the limited experience of the modern interceptor fighter pilot.  Used by Tangmere and Odiham – essential that any range should be within a 30 mile or at most 50 mile radius from the aerodrome. The south coast was a particularly difficult area to site such ranges and no alternatives existed during the war or just after than at Selsey as objections would be even greater.  The original RAF demand was for 310 acres, but they had reduced it to 149 acres to meet local objections and had closed ranges at Pagham Harbour and Studland bay.

Aircraft would carry out diving attacks against targets with 20mm cannon and rocket projectiles.  The direction of cannon fire was seawards and at right angles to the coast. The danger area, funnel shaped, stretched 6,000 yards from the targets. The attacking aircraft dived at an angle of approx 30° firing short bursts at point blank range at an altitude of between 300 to 1,000 feet.  Rocket firing was similar, except the dive was slightly shallower at around 25° and carried out at a slightly higher altitude.  Inert rocket heads were used except in special instances when live ones were used. The gunnery and rocket targets were superimposed and the two forms of practice could not therefore take place simultaneously. 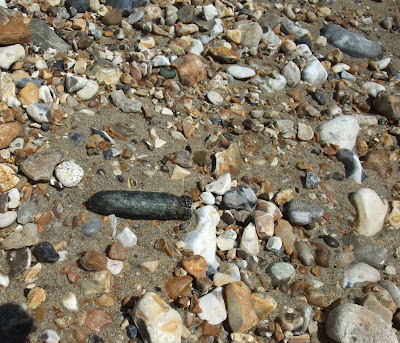 The bombing target was a triangular shaped raft with a pyramidal super-structure and was moored approx 700 yards off shore, immediately seawards of the land range. Here, 11½lb and 25lb practice smoke bombs were used, which detonated with contact with the water or target. The danger area was 1,000 yards. The target was attacked by either high, medium or low level approach or dive bombing, as required by the training programme. The 1,000 yards radius danger area will be almost wholly below the high water mark.

Normal use was daily from Monday morning to Saturday noon each week, however due to weather and other factors unlikely to be in use throughout the whole of the daily working period.  When in use, public was to be restricted by closing 1,000 yards of beach and fishing was to be stopped. When not in use, there were no restrictions to public access or fishing. Range Officer was in radio contact with the aircraft at all times and in an emergency bombing or firing could be stopped immediately.

Opposition Case:  The Opposition’s case was lead by Joynson Hicks MP. Strong objections were raised at the Inquiry on the grounds that it would be detrimental to the neighbourhood by depreciating the value of property and destroying the popularity of neighbouring holiday resorts.  It was also maintained that the use of the ranges would hamper agriculture and fishing as well as yachting.  Further objection was raised on the possibility of damage to the banks of the River Rife and interference with drainage works.  Jonyson Hicks also produced a letter at the Inquiry signed by 10 Medical Practitioners that the proposals would be injurious to health, especially children and the infirm.  The local vicar complained bitterly of the noise aircraft made to children’s lessons.

Joynson Hicks also objected that the amenities around West Wittering had been ‘spoiled’ because of the dropping of live bombs; it would be better for The Air Ministry ‘to stay there rather than go to somewhere else in the district and spoil that too’. It was found that the area in question was the west end of the live RP target area, and the unexploded bombs were actually live RP that were fouling the area. At first it was thought the area would have to remain closed, but it was subsequently deemed safe to allow public access.

By far the greatest objection was made by the West Sussex Rivers Catchment Board. The drainage of a wide area (reported to be 3,000 acres) converged on the Broad Rife and its outfalls and in times of flood only the high banks of the stream prevent the whole area from flooding. A system of groynes on the shingle bank is also maintained to protect the bank. During the war, damage had been caused by rockets to the banks of the Broad Rife and the sea defences. However, the new range was sited 300 yards from the nearest point of the river. Firing was also much more accurate, with 90 percent of rockets hitting within 100 yards of the target and the 10 percent ‘wides’ very little over 100 yards. During the war, rockets were relatively new and much less accurate.  Although damage was caused to the banks in the war, there were no incidents of flooding.

With regards to the Manhood range, the objections, subject to Range requirements, were met by the use of practice bombs only, permitting the maximum use of agricultural land with special arrangements made for seasonal operations such as sowing and harvest.  Employees from the Catchment Board would be allowed access to the area to inspect and maintain the banks of the River Rife and liaison maintained by the Range Officer and the fishing industry to minimise interference with fishermen. There would be no restrictions to public access during none firing periods.

It was appreciated that there was bound to be some noise disturbance to holiday camps and other amenities in the neighbourhood. There would only be two aircraft carrying out simultaneous practice and every effort would be made to avoid low level flying.  Freedom to manoeuvre was vital, although low flying over towns was prohibited. The noise from the weapons used was considered to be small, and in no way comparable to that made by heavy artillery. The suggested alternative of a floating concrete raft moored at sea was found to be impracticable.

The Air Ministry’s proposals for the ranges were formally approved on 8 February 1949:

Serial no. 1049 – Selsey. An area of 149 acres, 135 of which were held under D.R. 51 and 14 are new land, together with an adjacent sea danger area stretching approximately 6,000 yards from the targets. The range is required for retention for diving attacks against land targets with 20mm. machine guns, rocket projectile (normally with inert heads) and for practice bombing on a target moored off-shore.  Four small sites are also required for Observation Posts.  Normal use will be from Monday to Saturday noon throughout the year.

However, there were some incidents of weekend use: Complaints received that the Manhood and Selsey ranges were used by aircraft from Odiham (located in Hampshire) and Tangmere (located in Sussex) on the following dates:

Normally, ranges not in use at weekends, but the units concerned were behind with their training programme, a matter that was bound to happen from time to time and this was explained at the Public Enquiry.

In the autumn of 1949, Chichester Rural District Council had a sewage scheme for East and West Wittering and made provision for a rising main for a rising main from East Wittering to the sewage works at Selsey. The original route was to cross the bombing range, but the Council’s engineers proposed a new route to avoid the range, which was 300 yards longer and would involve an extra cost of £900. The Council enquired if the Air Ministry would meet this extra cost. The Air Ministry had no liability to do so, and had no objection to granting the Council an easement at the Council’s own risk. It was considered that if the main was laid at least 30 inches deep, it would be sufficiently far enough behind the targets as to render the possibility of a hit being extremely remote.  In the end, the Council decided to opt for the original route through the bombing range.

Today, the range is now part of the Medmerry Coastal Realignment Scheme and an RSPB reserve. 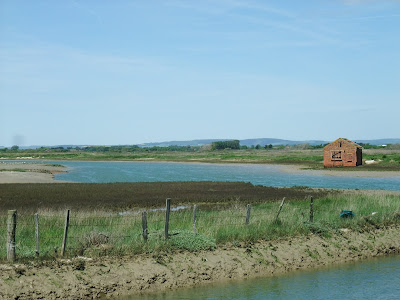 View across the range in present times (photo taken in 2018)