This post will look at some of the pillboxes which were designed for the Command Line. Already covered on the last two posts are a couple of the 6 pounder gun pillboxes, probably to design C.R.E 1116. The other two designs are C.R.E 1113 - a shell proof pillbox for a section with Bren gun, designed to be sited on the front line to command the anti-tank obstacle. The other  design is C.E.E 1094, a bullet proof pillbox for one section with a Bren gun, sited to cover the front line pots from attack from the rear by parachutists.
Image 1-4: A shell proof pillbox, prob to design C.R.E 1113. Instead of the low level protected entrance, this one has a separate blast wall with embrasure.
Image 5: Another example of C.R.E 1113. This one has an 'L' shaped blast wall.
Image 6: An example of a bullet proof pillbox, prob to design C.R.E 1094.
Image 7: An anti-aircraft central well in a C.R.E 1094 pillbox. There are examples of both the shell proof and bullet proof pillbox with and without the central well although no indication in the surviving documents that they were designated a different design number.
Image 8: Interior of a C.R.E 1094
Image 9: Surviving permanent part of a rail block. The rails would have been blocked with a waggon block. 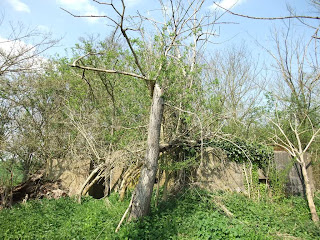 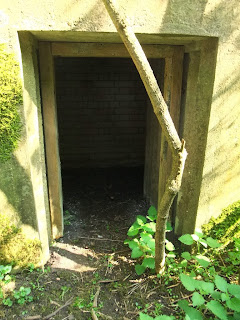 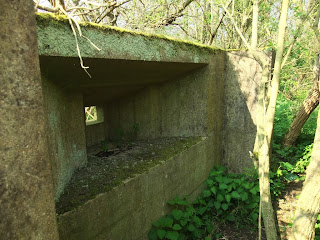 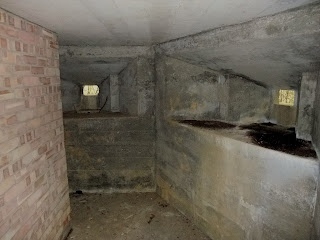 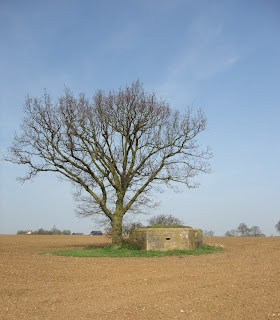 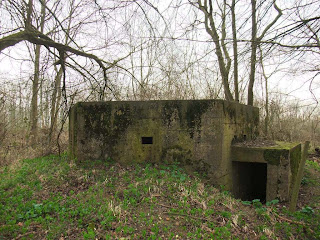 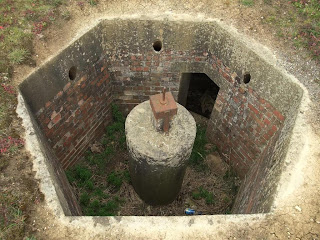 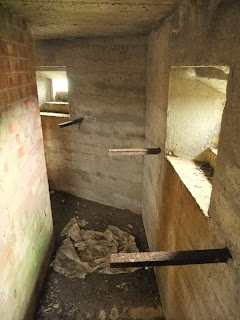 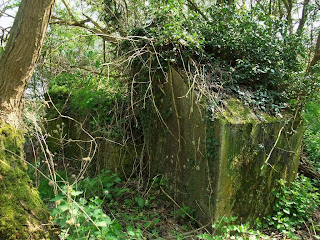 Another post on this visit, now way back in the past in April! First up is another probable CRE 1116  - on this one all the embrasures and the entrance are blocked (although just enough of a gap to hold a camera for an internal photo!) but it is identical to the one at Slough Farm. Also close by is a very well preserved Spigot Mortar position.


Next up is some unusual graffiti - if you are lucky you occasionally come across some evidence of who built the pillbox or troops billeted nearby. But on this occasion the names are German and the date 1946! German POW's were still present in  Britain up to 1948 (400,000 in 1946, 150,000 in 1947 with the last repatriated  by Nov 1948) . The post-war British Government at first deliberately ignored the Geneva Convention by refusing to repatriate POW's. They were often forced to work on farms (and perhaps clearing the Anti-invasion defences?) in conditions often described as slave labour and fraternisation with the home population was forbidden. Saying this, conditions were probably better than those German POW's who had to clear the minefields etc in France when many were killed. The situation became more relaxed by Christmas 1946 and in the end many actually decided to settle in Britain. I have come across a reference to POW camps still in Britain in 1946/7 but have not yet checked it out so have no idea where these two Germans would have been imprisoned.


I also located the positions of some of the 2 pounder anti-tank gun positions prepared. Included in this post is the easiest one to visualise. A pillbox is also recorded in the official documents as being nearby - nothing remains of this except perhaps some concrete rubble present today.

Image 1-3: Prob. CRE 1116 6 pounder gun pillbox, Lavenham. Image 2 shows how it would have covered the bridge crossing the rail line.
Image 4 & 5: Spigot Mortar position near the above pillbox.
Image 6 & 7. What I assume is German POW graffiti. Trier (Image 7) is a city  on the banks of the Moselle River, the oldest city in Germany.
Image 8: Field of fire from a 2 pounder anti-tank gun position sited to cover the Command Line. 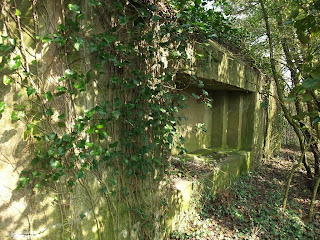 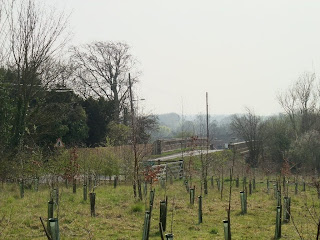 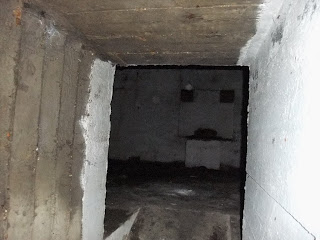 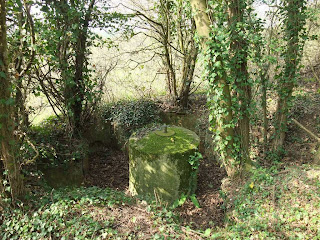 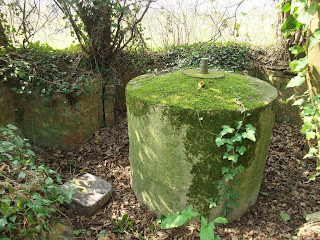 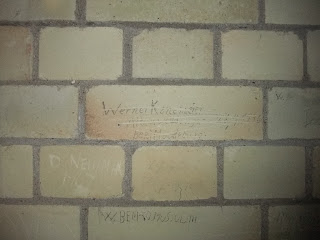 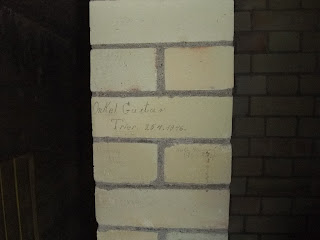 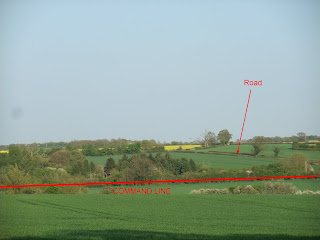 There are two interesting Type 22 pillboxes in the lavenham area, close to each other but quite different in character.  One is a first line position pillbox on the Command Line while the other is on the rear line.  All the other pillboxes in this area are of the new designs for the Command Line (C.R.E 1116, 1113 and 1096). Neither of these two seem to be on the list of the Command Line pillboxes.
The one on the first line position would appear to have embrasures designed to take a Turnbull mount (a cradle designed to hold a light machine gun), of which two  have been fitted. It is bullet proof, with an internal anti-ricochet wall and a low level protected entrance, typical on this part of the Command Line. The two machine guns in these mounts would have covered a crossing over the Command line. The remaining embrasures have metal plates fitted to make them bullet proof. As the Turnbull mount was not introduced until late 1940, could this pillbox  have been built after the initial work on the Command Line was completed?  Although why it is not shell proof like other first line pillboxes is a mystery.
The second pillbox is also bullet proof and again has a low level protected entrance. However the embrasures are much narrower (with four 'steps' and a metal plate for reinforcement on the last 'step'). It was presumably thought less likely that a stray bullet could enter through these embrasures as there is no internal anti-ricochet wall.
Images 1-5: Type 22 on first line position with Turnbull mounts fitted in two embrasures.
Images 6-7: Type 22 on rear line position with narrow embrasures and no internal anti-ricochet wall. 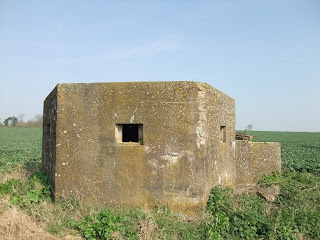 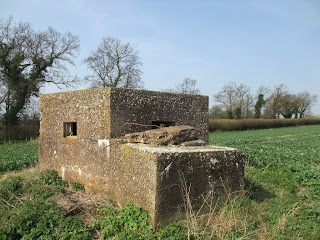 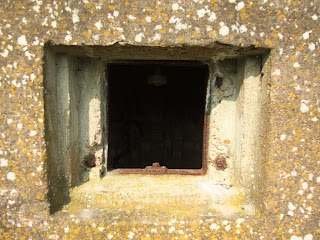 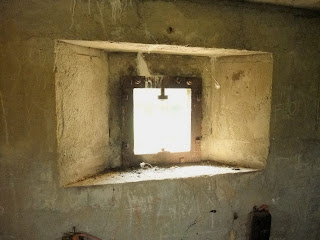 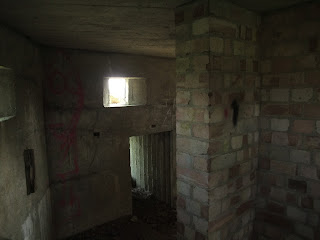 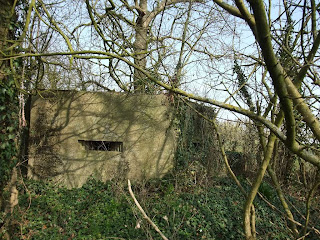 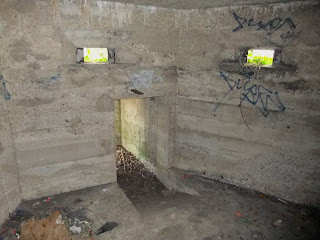 In April I spent a pleasant day at Lavenham. So a few posts to follow on this visit starting with this 6 pdr anti-tank gun pillbox at Slough Farm.  It was sited to control the approach to, as well a crossing over, the Command Line. The anti-tank obstacle was the railway line, with deep cuttings in places, as well as sections of anti-tank ditch where the railway line did not provide an adequate obstacle.
It is probably to design C.R.E 1116, one of three new designs of pillboxes to be used on the Command Line. It is obviously based on the Type 28a but was designed to house a static 6 pounder gun and not the 2 pounder gun. There is a holdfast for the gun and the main embrasure is narrower than that on a Type 28a designed for the 2 pounder. The other two differences are the low level protected entrance which is a common feature on pillboxes on the Command Line and a lack of internal Anti-Ricochet wall separating the infantry light machine gun  embrasures from the gun embrasure.
According to the official documents, the serial number of this pillbox was "CA3", but the white stencil on the holdfast clearly has an "B" as well as a "3" marked. The gun was never mounted and the main embrasure was blocked up and two small rifle embrasures added instead,  which both are angled.
Image 1: Holdfast and embrasure for 6 pdr gun and embrasure for light machine gun. Main embrasure has been blocked up and two rifle embrasures added.
Image 2: Holdfast with white stencil showing "B" and a "3".
Image 3: Main embrasure from the outside, now blocked up and two rifle embrasures added.
Image 4: Close up of the rifle embrasures, note how they have been strongly angled.
Image 5: The approach to the Command Line this pillbox controlled (the pillbox is located on the left hand side of the bridge). 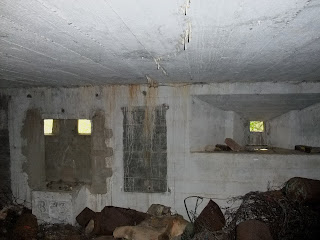 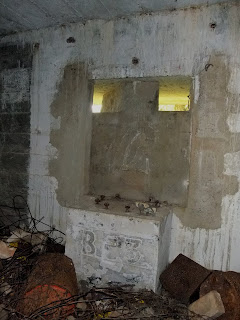 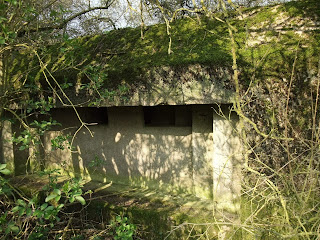 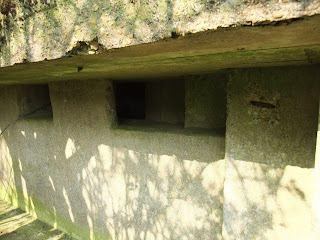 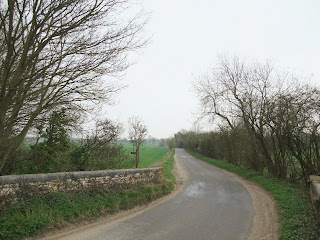