This post will look at the scenario of the demonstration and the site as it exists today. The War Diaries note that the site for the demonstration was chosen in order to provide a good view point for spectators of the demonstration rather than ground which would be suitable from a tactical point if it was for real.
The scenario for the attack was that enemy forces had been driven off 'Grandstand Ridge' and had fallen back to prepared positions on 'Forest Ridge' where they were holding defended localities. 163rd Brigade had forward posts established on 'Grandstand Ridge' and for the purpose of the demonstration, 198th Infantry Brigade was to attack through 163rd Brigade and capture 'Forest Ridge' with a view to driving the enemy out of Tunstall Forest.
The demonstration was to take the form of:
Although the demonstration was carried out in daylight, it was assumed that the work in clearing the first minefield and preparing crossings over the anti-tank ditch took place during the darkness of early morning, troops taking part being issued with dark glasses. The actual 'attack' went in at 'dawn' (actually 1215 pm for the demonstration).
It is worth quoting the following from Military Training Pamphlet 'Tactical handling of Tanks in co-operation with Infantry' - Provisional 1949:


'The first essential in any deliberate attack will almost always be the breaching of those obstacles, natural or artificial, which form part of the enemy defences. To effect this, breaching teams, composed normally of assault engineers and specialized armoured troops, must be detailed, as well as the necessary arms to provide protection by supporting fire and smoke whilst the actual operation is being carried out'. The above demonstration clearly illustrates this statement and in fact it could equally apply to tactics developed by the end of the First War.
The pamphlet also notes that the infantry momentum must be kept up and the assault on the final objective would be aided by the fire support of tanks.
Next post on this demonstration will look in more detail at barrages, fascines, Bangalore Torpedoes  and snakes.
Troops taking part in the exercise included:
One squadron 156 R.A.C
One squadron 157 R.A.C
19 Field Regt
Three Troops 168 Field Regt
75 Med Regt
One section 598 Field Company
One battalion 198 Inf Brigade (7th Borders)
Image 1: Sketch of demonstration site with start line 'Grandstand Ridge' and objective 'Forest Ridge' added. An enclosure was erected on 'Grandstand Ridge' for spectators to view the demonstration. The circled numbers are the positions from which the following images were taken:
(1) Image taken from 'Grandstand Ridge' looking over the demonstration site towards 'Forest Ridge'.
(2) Image taken from the slope leading up to 'Forest Ridge' looking back towards 'Grandstand Ridge'.
(3) Image taken from anti-tank ditch, looking towards 'Forest Ridge'
(4) Part of the 'imaginary' battle field, looking from an enemy defended locality over Fazeboons towards 'Grandstand' Ridge. Briefings for the demonstration were held at Fazeboons.
(5) The drainage ditch 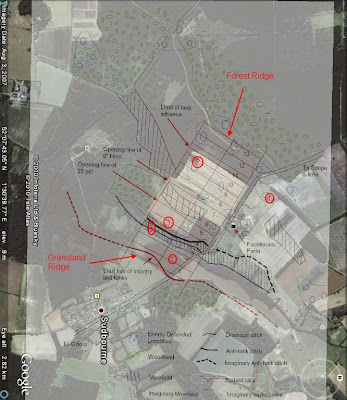 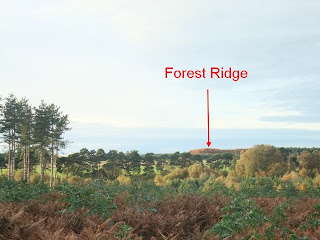 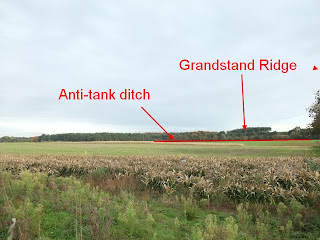 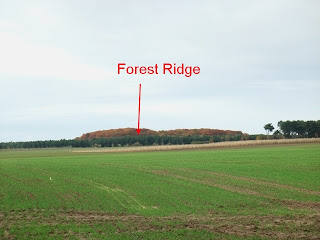 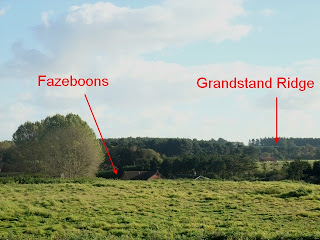 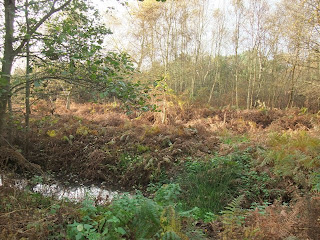