I have already posted on this before, but the following series of posts on Freiston Shore and other areas are the result of research I was fortunate enough to be able to carry out while on Sabbatical at work. This series of posts on the defences of Freiston will be split into three parts:

2. The adjacent pillbox remains that can be seen today.

3. The history that the defences played in Britain's WW2 anti-invasion defences.

Above: archaeology recorded at Freiston Shore during the  Sabbatical.

The Battery consists to two gun-houses for 6-inch naval guns, their associated shell and cartridge stores, two CASL emplacements, and shelters for the personnel while on duty.  The gun-houses and CASLs are on top of the sea wall, while the shell and cartridge stores and duty shelters are on the reverse slope of the bank, as would be expected.  For local protection, a pillbox is within the Battery layout. 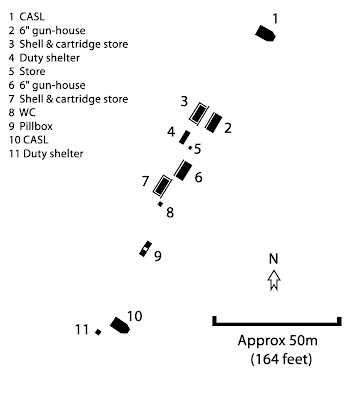 Above: Layout of the Emergency Coastal Battery at Freiston Shore.

There is no purpose built observation post; presumably one of the existing buildings at Freiston Shore such as the Marine Inn – which was also used to accommodate troops – would have been used. 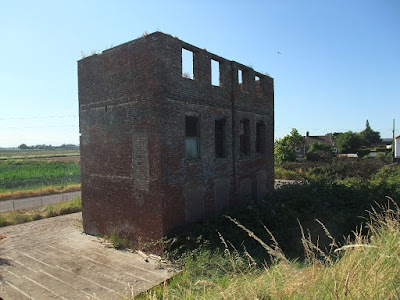 Above: Ruins of the Marine Inn, used for accommodating troops holding Freiston Shore. It may also have acted as the Battery observation post. 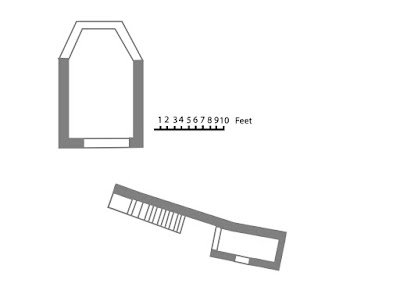 The CASLs are irregular hexagon structures, with two side walls approx 12ft 1in long, a rear wall of 11ft 4in long and three forward faces of 6 feet long. There is a 6 feet wide entrance in the rear wall. The walls are 1 feet thick and have been finished externally with render and pebbles as part of its camouflage scheme.  Grove and bolts can be seen on the front walls for the fastening of steel shutters in periods when the searchlight was not in use. The southern CASL FS9 has had an internal brick wall and a Braithwaite type of diesel tank added post war, while the northern CASL (not within the reserve boundary) is used as a summer house. Also CASL FS9 has an associated duty shelter, accessed by steps down the reverse slope of the bank, which is revetted with a 1 feet thick concrete wall.  The duty shelter is a simple rectangular building, 3ft 9in by 10ft 5in and  the walls are 1 feet thick. It has a 2ft 9in wide doorway and a single window. There is a small fire place inside. 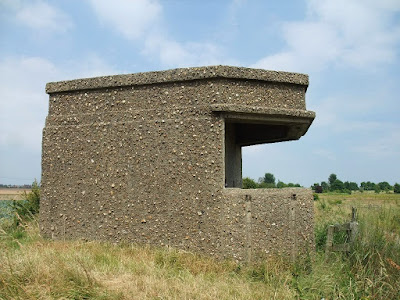 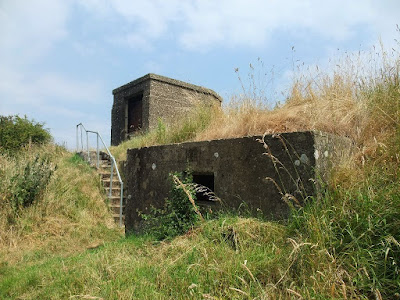 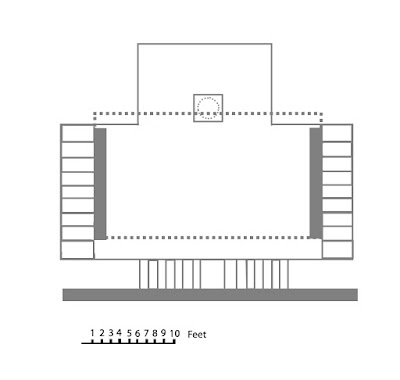 The gun houses consist of a ‘T’ shaped concrete platform laid in sections, with a metal holdfast for a 6 inch naval gun set into it. The holdfast consists of a 3ft 6in metal plate with 24 studs, some of which still retain their nuts.  There are two side walls, each 12ft 7in long and 1 feet thick which support a thick concrete roof.  Behind the gun platform is a 1 feet thick blast wall, keyed into the roof by metal rods. There are loopholes in the blast wall for local defence (four in FS3 and two in FS2). Steps lead down the reverse slope of the bank by the side of the gun house and in the rear to a concrete path which leads to the duty shelter and shell and cartridge stores. 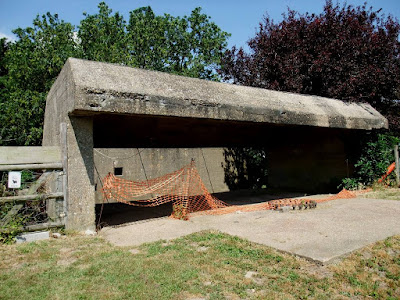 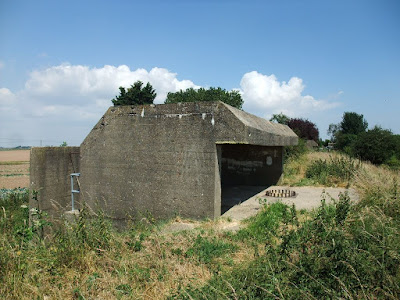 Above: FS3 – the second gun house for a naval 6-inch gun. 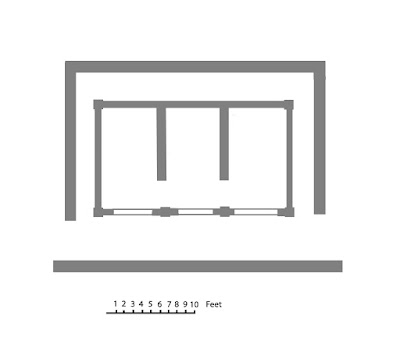 Above: Plan of shell and cartridge store FS6 (no. 7 on plan of Battery layout).

The shell and cartridge stores are simple rectangular buildings 23ft 7in long by 13ft 5in wide; the walls are 10 inches thick. They are surrounded by a 1 feet thick blast wall. Internally, they are divided into three chambers by 1 foot thick and 8ft 10in long walls. There are two entrances (4 feet wide) and one window.  The roof is 7 inches thick. 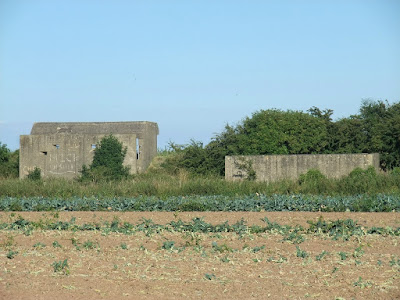 Above: FS3 gun house (left) and FS6 shell and cartridge store (right) from the rear. 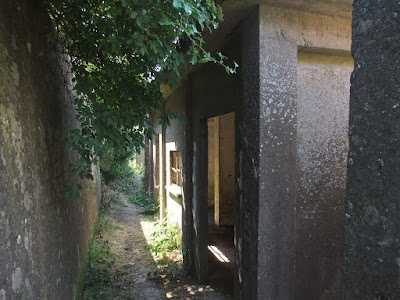 Above: FS6 – shell and cartridge store. 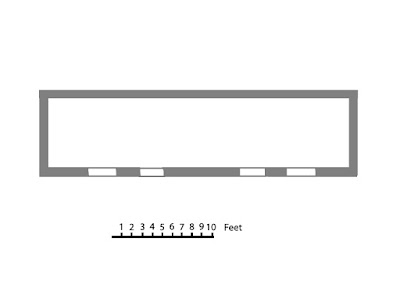 Above: Plan of duty shelter FS4 (no.4 on plan of Battery layout).

The duty shelter is also a simple rectangular building, 32 feet long by 7ft 10in wide.  The walls are 10 inches thick and the roof 7 inches thick. It has two 3 feet wide entrances. Inside, there is a brick bench at each end and a small fire place set into the front wall. Some original war time art can be seen on the inside of the rear wall.  Behind the duty shelter, set into the top of the bank, is another small rectangular structure measuring 8 feet by 5 feet, which was probably used for stores etc. 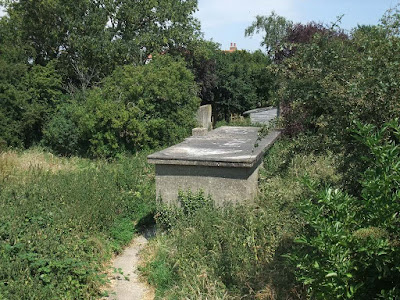 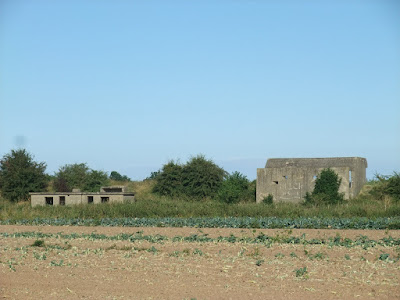 Above: Duty shelter FS4 (left) and gun house FS3 from the rear. Note the small structure behind the duty shelter, probably used for stores. 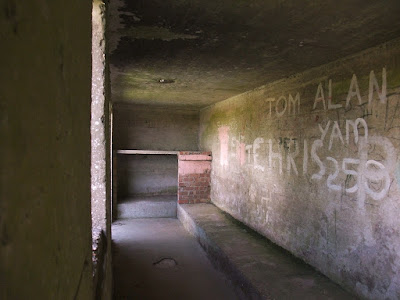 Above: Interior of duty shelter FS4; note brick bench at the far end. 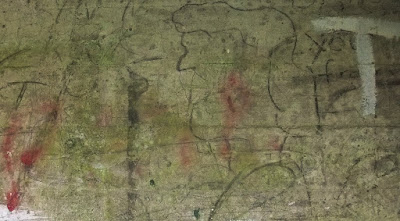 Above: one of the war time art works on the rear wall; the head of a woman can be clearly made out and also a German ME109 fighter is just about visible in the lower portion of the image. 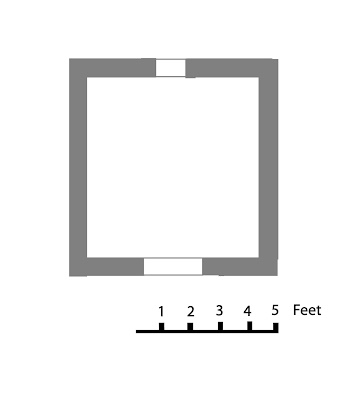 The WC is a simple 7ft 3in square building, with 7 inch thick walls.  There is a 2¾ inch metal pipe in one of the side walls. 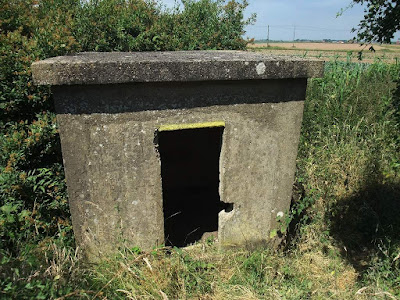