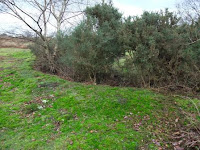 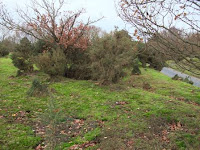 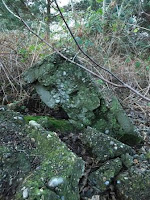 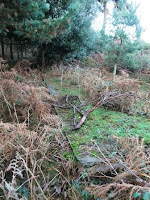 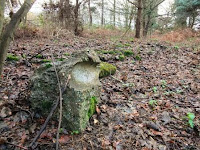 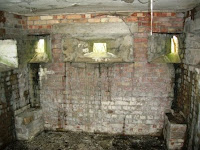 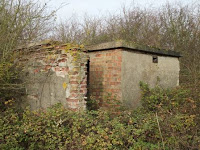 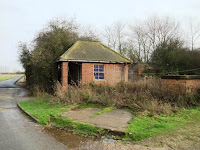 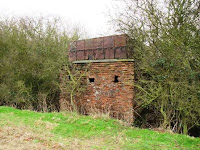 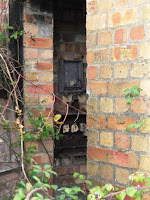 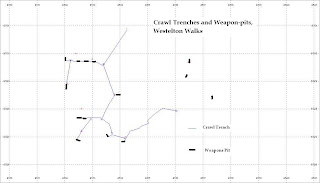 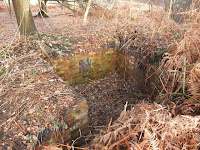 An excellent day in the field. Went back to map the system of crawl trenches and weapon-pits I found a couple of weeks ago. Also had a good look around another area I have not visited before and found two more crawl trench and weapon-pits localities, as well as several other earth works included crescent shaped weapon-pits. Also of note was a brick lined pit - I am not sure as yet if it is a weapon-pit or dugout. It had two recesses in the brick lined walls plus a 50" earth parapet. No sign of any roof material to indicate a dug-out, but that could have been removed long ago. As with other areas on Westleton Walks, these localities do not tie in with any platoon localities given in Home Forces war Diaries so the possibility of training/dummy positions cannot be ruled out.
Posted by Dave at 11:41 No comments: 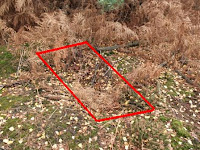 Managed to get some recording of anti-landing trenches at Sutton Common before the rain came. Sutton Common was also a training area right from the start of the war. I have come across several references to this location in battalion war diaries at NRA, including Gen A Brooke attending a demonstration of a tank attack through barbed wire and across an anti-tank ditch. As well as recording the anti-landing obstacles I had a wonder around and came across many earthworks, some certainly second war including the photo of a shell slit which was part of a group of shell slits and weapons pits in the vicinity of a dug-out (all would have been dug during training). Sutton Common is a huge area and will take much searching to see if other earthworks are present!
Posted by Dave at 08:51 No comments: 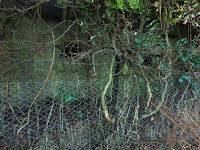 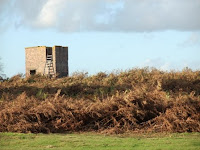 Of to the NRA tomorrow for a couple of days.
Top photo - Suffolk Square Pillbox hiding in a garden
Bottom Photo - ROC Observation Post
Posted by Dave at 10:11 No comments:

The results of two recent surveys. Snape Warren is again anti-landing trenches.  At this site it would appear that existing field / rabbit warren boundaries were incorporated into the obstacle grid.
The Westelton Walks map shows another section of weapons pits/crawl trenches over-looking the anti-tank ditch. What I did not make clear on my first post regarding this site is that the two maps posted so far are 'selective' in that many weapons pits/shell slits/shell scrapes nearby are not shown on the maps. This is because I'm sure most are training earthworks, with the ones shown on the maps the most likely to be truly defensive in that they at least would have provided fire to cover the anti-tank ditch. It is my intention to produce a map showing all the earth works eventually, in the meantime any comments would be welcome! Just to repeat from my last post, with the exception of the anti-tank ditch, to date I have found no reference to this site other than a training site.
Posted by Dave at 13:07 No comments: 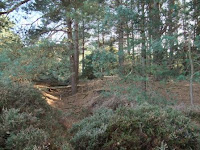 Visited Blaxhall Heath today to map the anti-landing trenches. To map all theses obstacles in Suffolk is a project in its own right! A wide deep trench appears to have been incorporated in the layout of this obstacle, not sure of the date or purpose of this trench. This site was apparently also used as a firing range - I found the remains of two tail fins of 2" mortars. The layout of the trenches is typical - a grid pattern. The spoil was placed in piles at intervals along both sides of the trench to further improve the obstacle to any landing aeroplanes/gliders.
Also some more work on the website today - its taking much longer than anticipated. If you have found this blog via the website, please be patient, I will get round to posting the field work stuff on it!
Posted by Dave at 09:25 No comments: 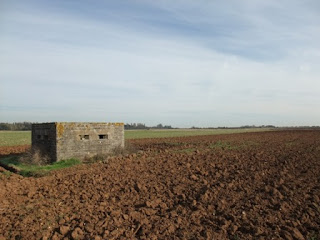 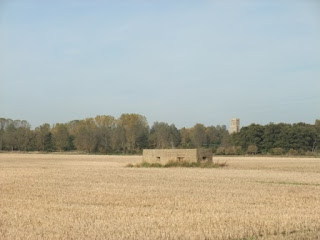 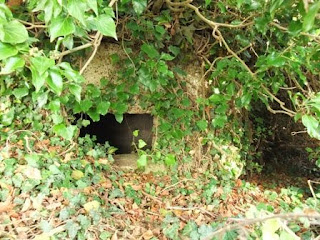 Thur 29th Oct
Visit to Shingle Street today to record two pillboxes I'd seen in the summer but was unable to get two due to crops. These were a Type 22 with a L shaped blast wall and a Suffolk Square with damage to the blast wall. As with other Suffolk Squares in this area its lacks any concrete weapons shelf found in Suffolk Squares further north.
I also came across a First War pillbox that I had not seen before. It is identical to the other nearby circular First War pillbox, in excellent condition but is virtually buried and hidden from view.
Top left - Suffolk square
Middle - Type 22
Bottom - WW1 pillbox
Posted by Dave at 06:08 No comments:

Right place at the right time 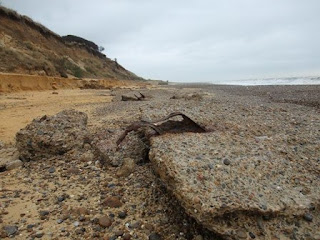 Wed 21 Oct - strong SE winds resulted in a large chunk of the beach at Thorpeness being washed away, revealing some interesting concrete. These turned out to be slabs with embedded iron lengths in them, protruding and angled up at one end. In total there were five of them. I'm sure they are obstacles to prevent German Invasion barges from landing. A good photo of what they would have looked like can be seen in East Anglia at War 1939-45 by D E Johnson. Today (Thur 22nd) they have again been covered by shingle so was lucky to be able to record them. They are however facing the wrong way, which is a bit of a mystery.
Posted by Dave at 11:30 No comments: