At Ward Hill, Thorpeness, there can be found the possible remains of a trench. It is approx 16m in length and runs in a northerly direction.  Is it First or Second War? Well actually, if it is indeed a trench, it is Second War and matches the location of  a section post of the 5th Royal Berks Regiment sited in 1941.  This followed a reorganising of the string of the linear defences sited to cover vulnerable beaches in 1940 and thus add depth to the defence. 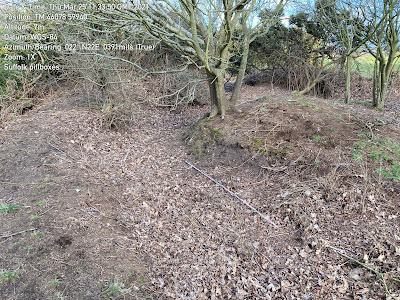 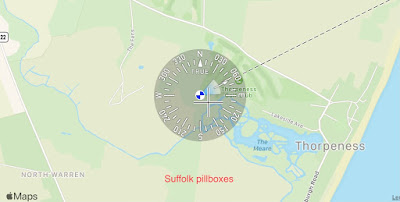 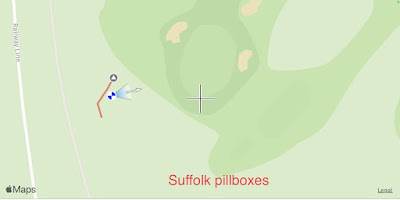 So why the suggestion of a First War trench? The answer to that question is because a trench in the vicinity is marked on  a trench map I acquired a while back, dated August 1914, and marked Orderly Room in feint crayon. There is also a very faint stamp, on which HQ Mounted Division can be made out. The Mounted Division, concentrated in East Anglia, was formed in August 1914 from four mounted brigades for Home Defence. The Eastern Mounted Brigade was mobilised in early 1914 and formed one of the four brigades of the Mounted Division.  In Suffolk, the assigned units of the Brigade were C Squadron Suffolk Yeomanry at Ipswich and D Squadron Suffolk Yeomanry at Beccles. Also stationed along the Suffolk coast was the 1/6 Suffolk Cyclist Battalion. It was raised as a Cyclist battalion in 1911 by Lieut. Col.  W.T. Pretty, T.D. At the beginning of August the battalion, at full strength, was at camp undergoing its annual training at Pakefield Cliff. During the Precautionary Period, the battalion garrisoned points along the coast between the rivers Deben and Waveney. On general mobilisation, following the declaration of war, it moved to its war station at Saxmundham. Before other cyclist battalions arrived, the battalion was responsible for the defence of the entire coast of Suffolk except for the Harwich defences. Cyclists were thought to be better suited than cavalry to the type of landscape of coastal Suffolk with its small fields, hedgerows, narrow lanes, marshes etc. 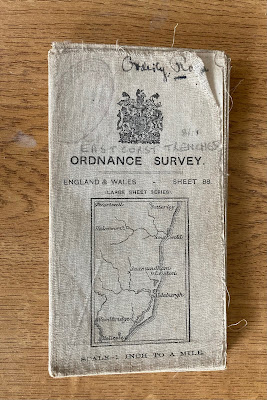 The location of the trench - called Ward Hill Trench - on the map is slightly south of the possible extant trench remains and would have been somewhere on the current Thorpeness Golf Course. I am certain it would have been on the highest 10m contour at Ward Hill. The photo shows that the slope, looking almost east,  has an approx 3.9 degrees slope which converts to a 6.82 percent slope so it would have had a commanding field of fire in this direction. Ward Hill Trench could have been dug by troops from the Yeomanry or Cyclist units mentioned above, volunteers rushing to join up who were put to use in digging trenches or even conscripted unemployed labour. 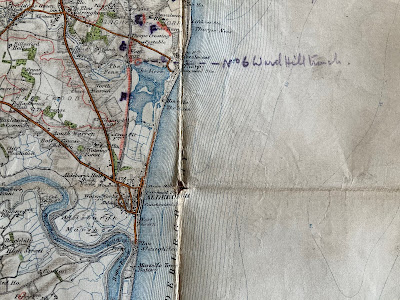 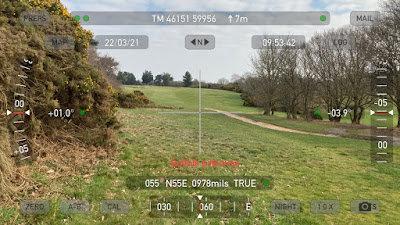 In 1914 there was no intention of stopping a German invasion force or raid on the beaches. The plan was to establish a central reserve - Central Force - that could intervene rapidly utilising internal lines of communication when the invading enemy troops had landed. Mobility was the requirement, hence the Eastern Mounted Brigade  being sent to East Anglia. It was expected to delay the movement of enemy forces inland until Central Force could intervene. In the meantime, the Navy would intervene and cut off the enemy supply route.

I wonder what form these early 1914 trenches would have taken? The field manuals of the time do show trenches 8 feet deep approaching those that would become familiar on the Western Front, yet in pre-war manoeuvers,substantial trenches were not dug. Later in the war, trench networks modelled on the Western Front were dug for Home defence. 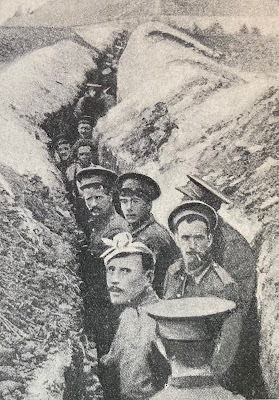 Above: early trench in Belgium, October 1914. Perhaps Ward Hill trench would have resembled this?

It is interesting to see that trenches were dug in the same locality in 1914 and 1941. However, it is perhaps not that surprising, as the landscape would have changed little and a tactical feature in 1914 would have been one as well in 1940/41. For instance, many surviving Great War pillboxes were known to have been incorporated into the Second War anti-invasion defences because they occupied tactical positions. Ward Hill, although hard to visualise today with the tree and scrub cover on the golf course, dominated the low-lying village of Thorpeness, with the railway cutting providing additional shelter for troops.  Unfortunately, records for Home Defence in the Great War have generally not survived, thus it is usually impossible to follow a chronological organisation of the defences, which is often possible for the Second War anti-invasion defences.

I also took the chance to test out some new apps for recording WW1/WW2 archaeology, as shown in the images above which give date, time, location and the ability to add notes as well as simple survey work. Still got some learning to do about various datums though! All GPS units use the world-standard WGS-84 datum. This is a good comprise for world use, and virtually every online mapping tool uses this datum. However, if you want to accurately plot on OS maps you need to use OSGB-36. Tried playing with the two datums re altitude. The WGS-84 gave me a height of 7m; checking the OS map I was actually between  the 5m and 10m contour so pretty accurate. Yet, the OSGB-36 datum told me I was at 36m below sea level - how does that work for a local datum that supposed to be more accurate than the world standard one!