This post will look at the GPS plans of the four positions shown in the overview in Part 1 of this post. Whether or not the positions were laid out deliberately as suggested below I have no idea, but although it cannot be appreciated by the plots, actually out on the ground it was easy to imagine the primary fire task of each weapon-slit. 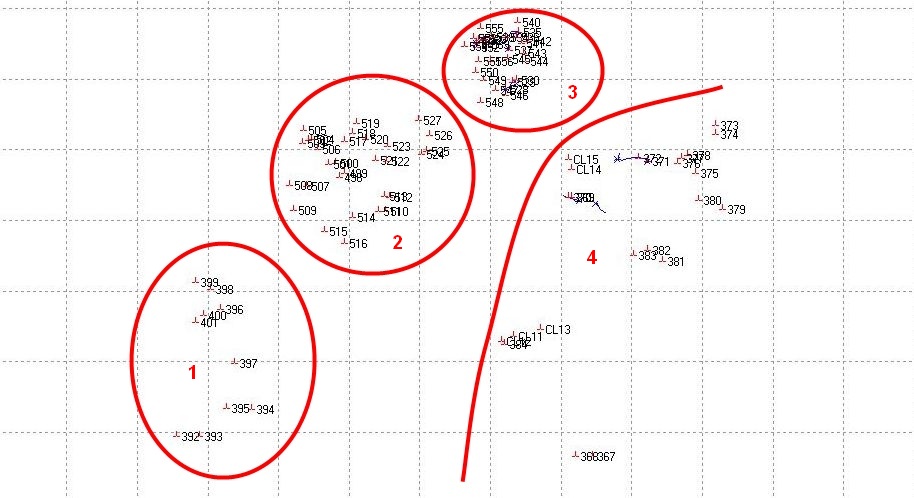 Next some diagrammatic representations of section posts from various manuals: 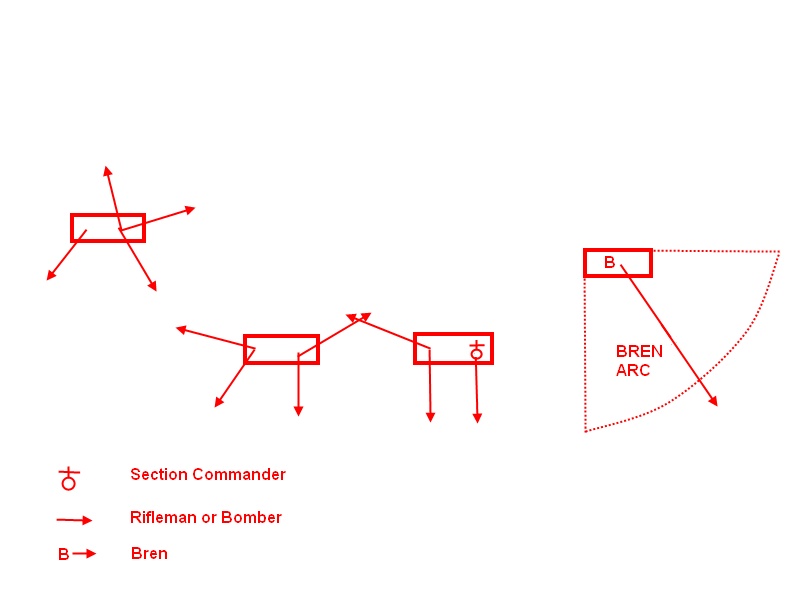 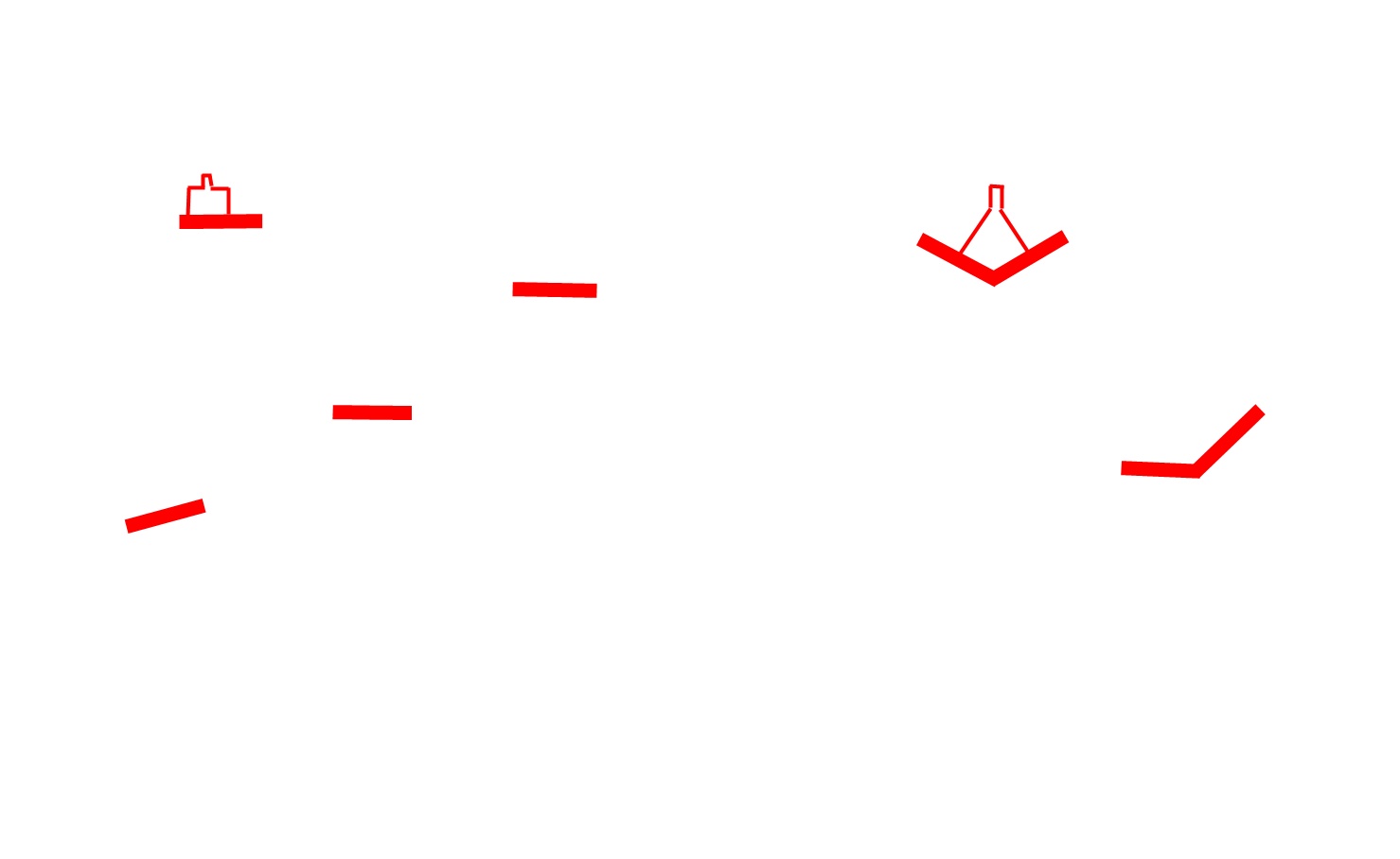 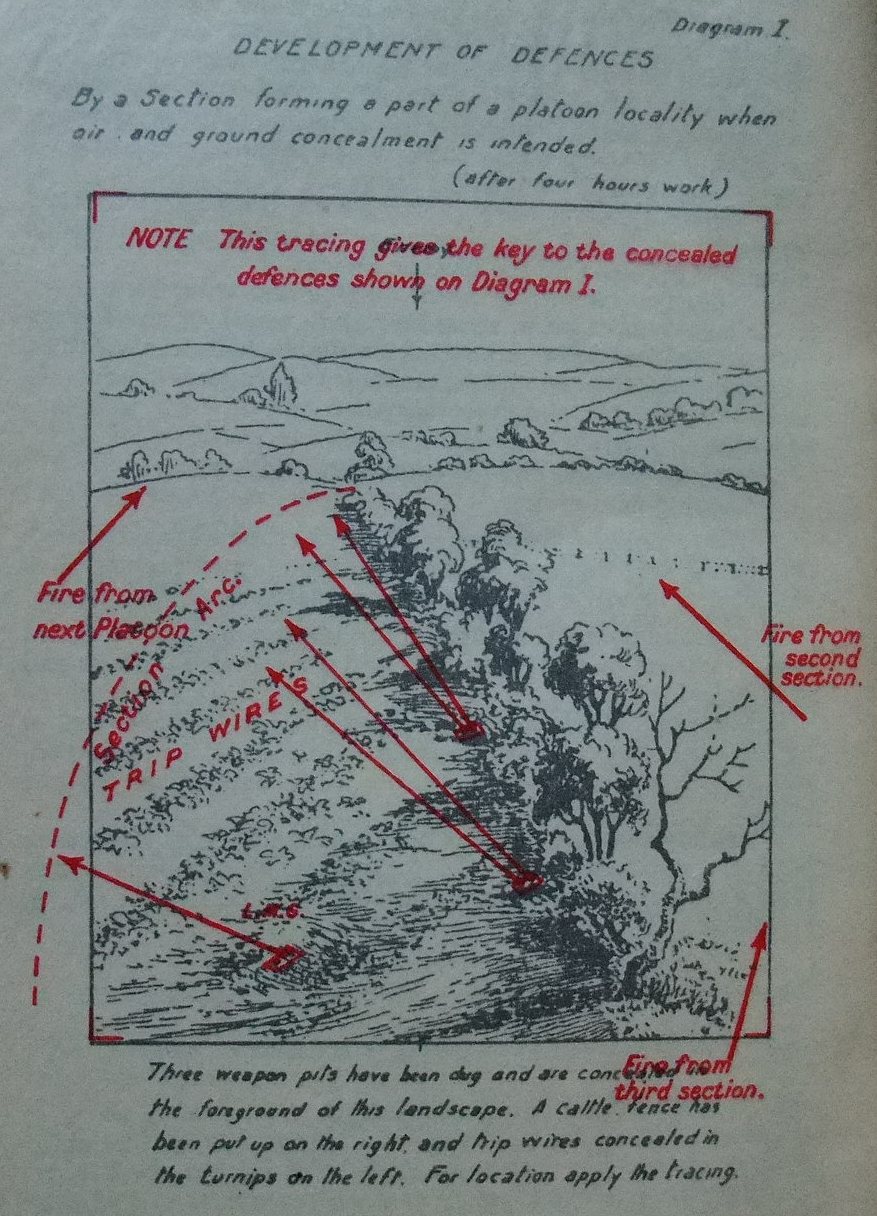 The above images may help put the following Practice Trenches in to some sort of context. A section would seldom be called upon to occupy an isolated position - the ideal layout for a platoon post (three sections) would be arranged in a triangle to ensure mutual support.

Number 1 group of trenches  consists of a number of one man/ two man weapon slits and a machine gun position. The trenches have been dug on a hill which overlooks a series of short spurs and ravines. The machine gun is sited to sweep the tops of these short spurs but the ravines would have been dead ground. The weapon-slits cover the slopes and ravine leading up to the position. The number of trenches would be sufficient for two sections / Gruppes. 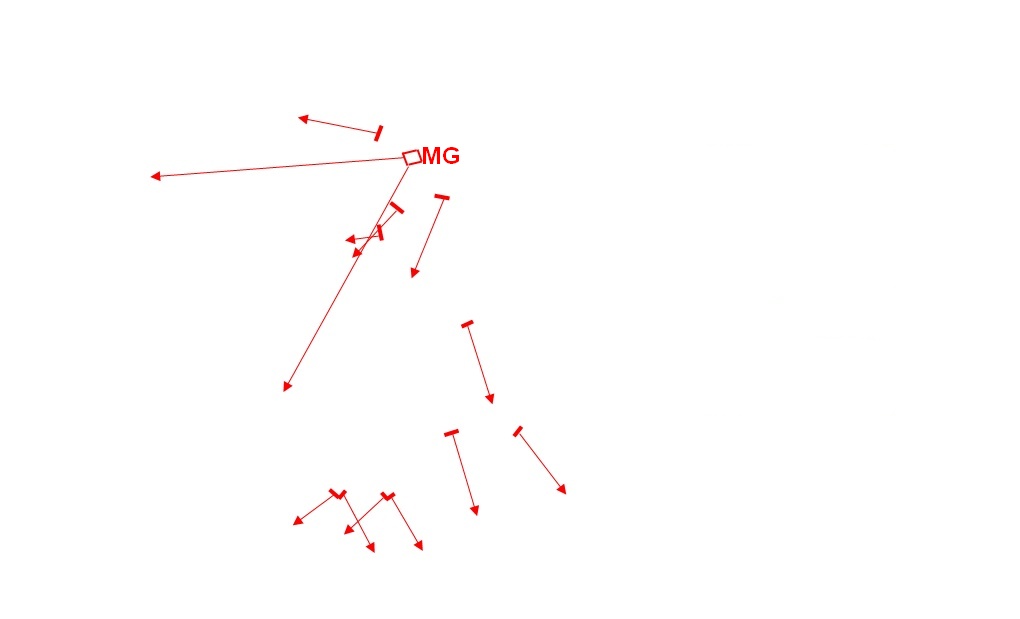 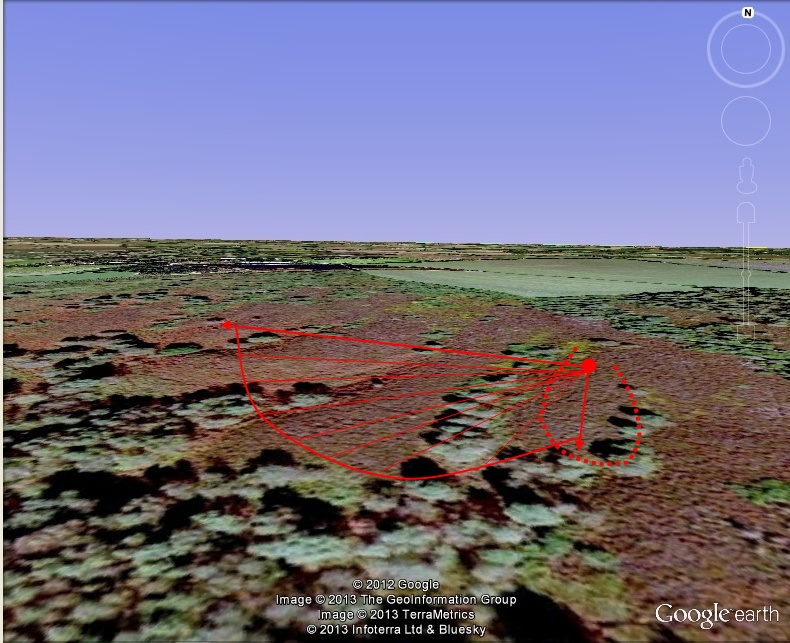 Above: Top - plot of trenches. Bottom - the position (dotted line) and the arc of fire of the MG - it can be seen how it would sweep the top of the series of spurs.


The machine gun emplacement is almost identical to that shown in various Field Work manuals (e.g. Field Engineering Vol 1 1933) for a Vickers Machine gun. It may well be that this trench was dug to represent a MG position rather than specifically for a Vickers. 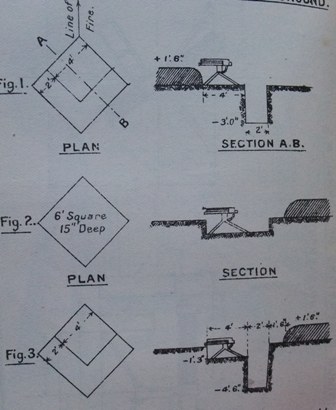 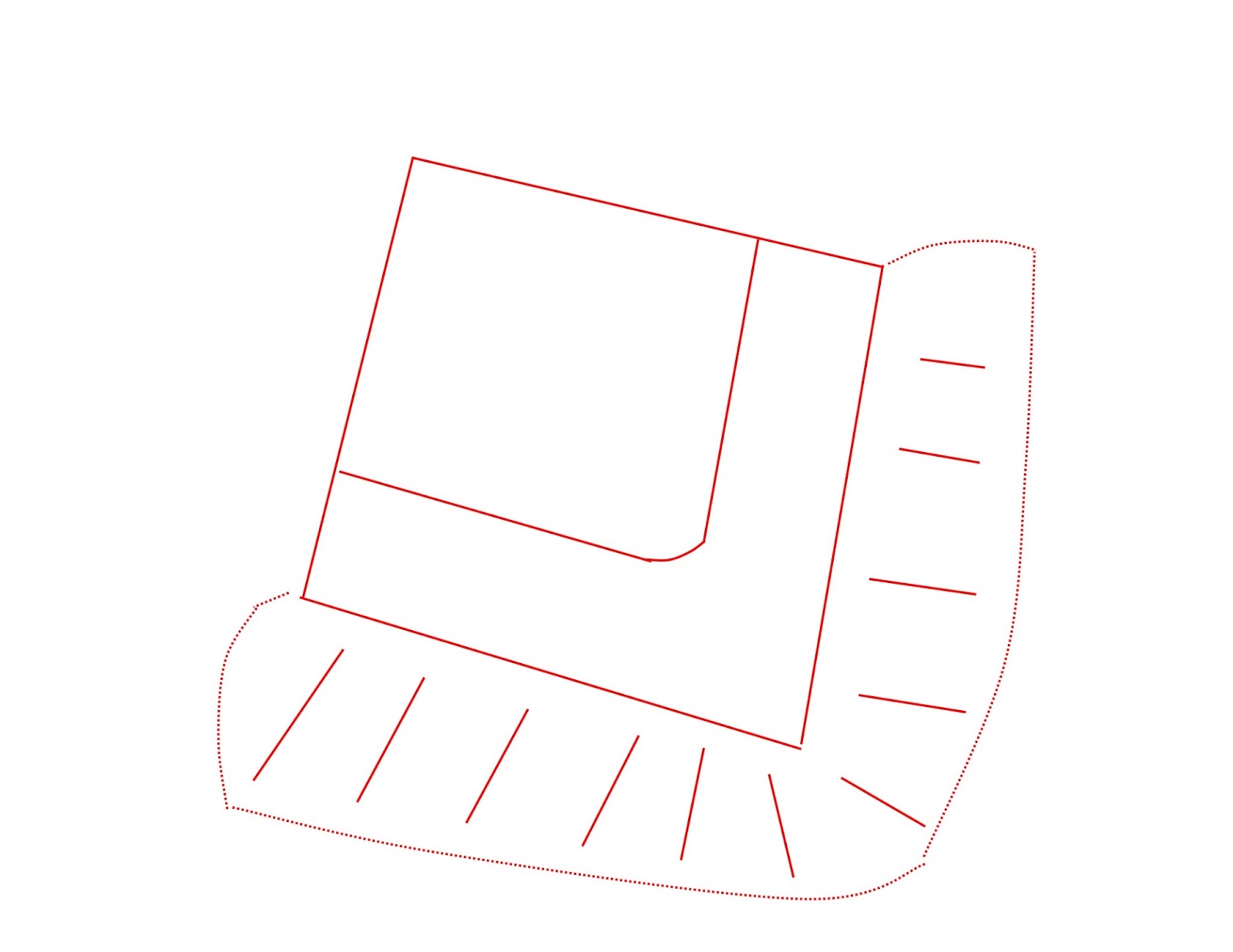 Above: Top - Vickers Machine Gun emplacement - Field Engineering Vol I 1933
Bottom - plan of the pit at Westleton - it matches Fig 3 in the manual  including the spoil used to build a parados. It is the only pit where the spoil has not been removed. The platform for the gun is about 7" deep (the manual gives 1'3").

Number 2 group of trenches appears to show a perimeter of pits, perhaps of a platoon / Zug position with pits sited for all round defence. In practice, pits would be dug  for all round defence but those occupied would be to meet the direction of an actual attack. Again sited on high ground with some of the pits on the forward slope to cover a valley/ravine. 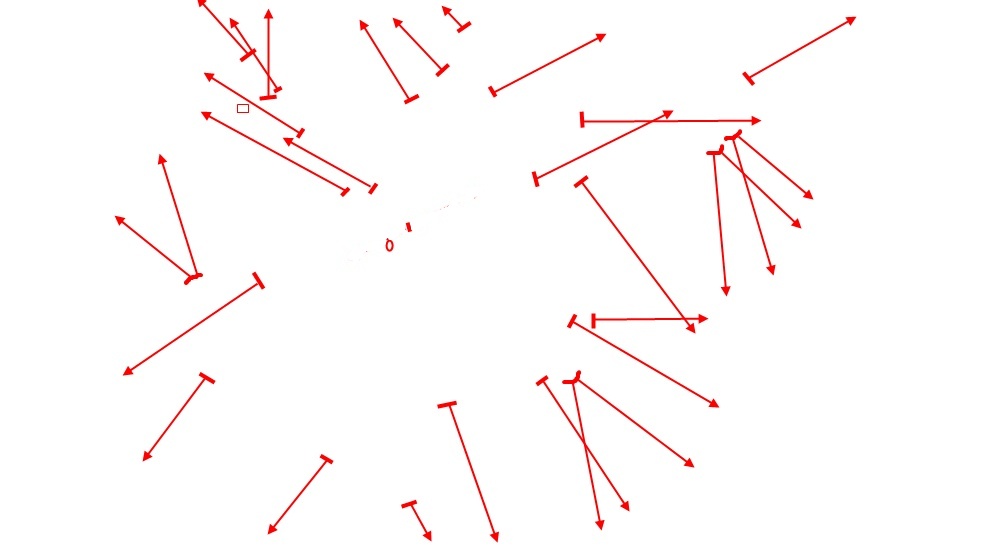 Number 3 group of trenches has some of the slits connected by crawl trenches. Again perhaps a platoon / Zug position. 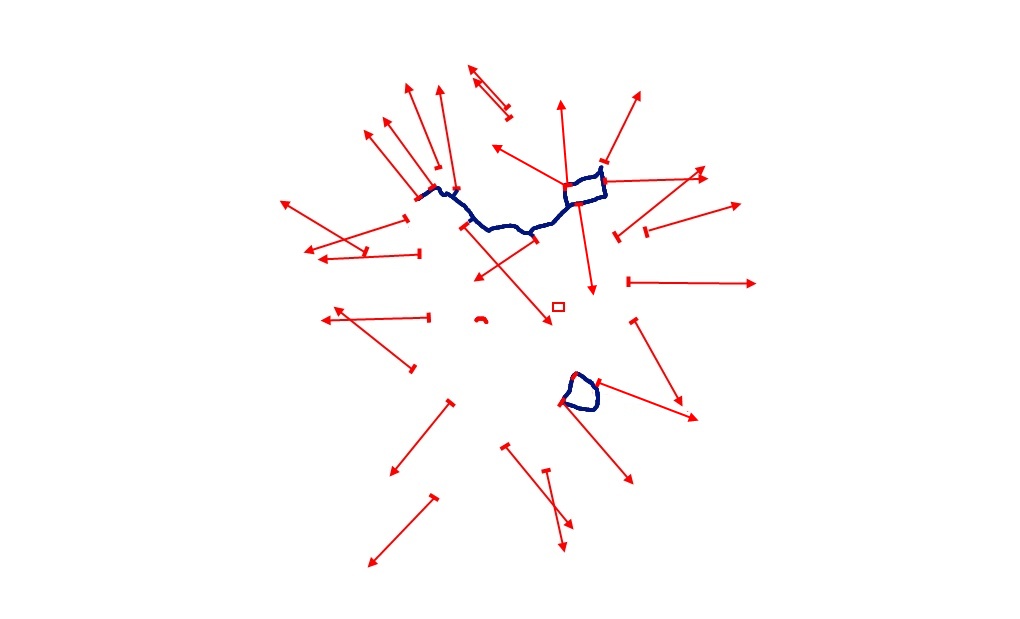 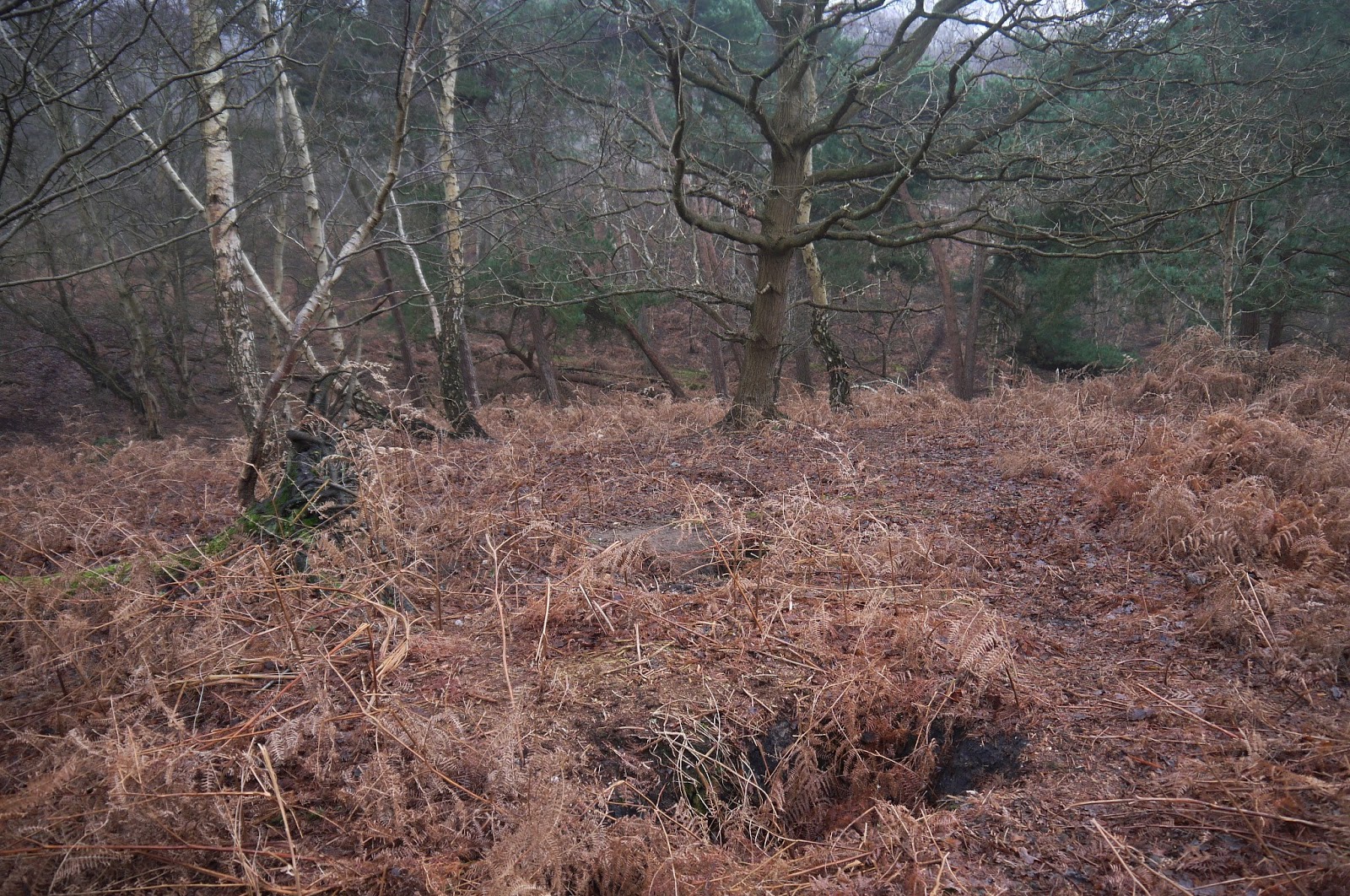 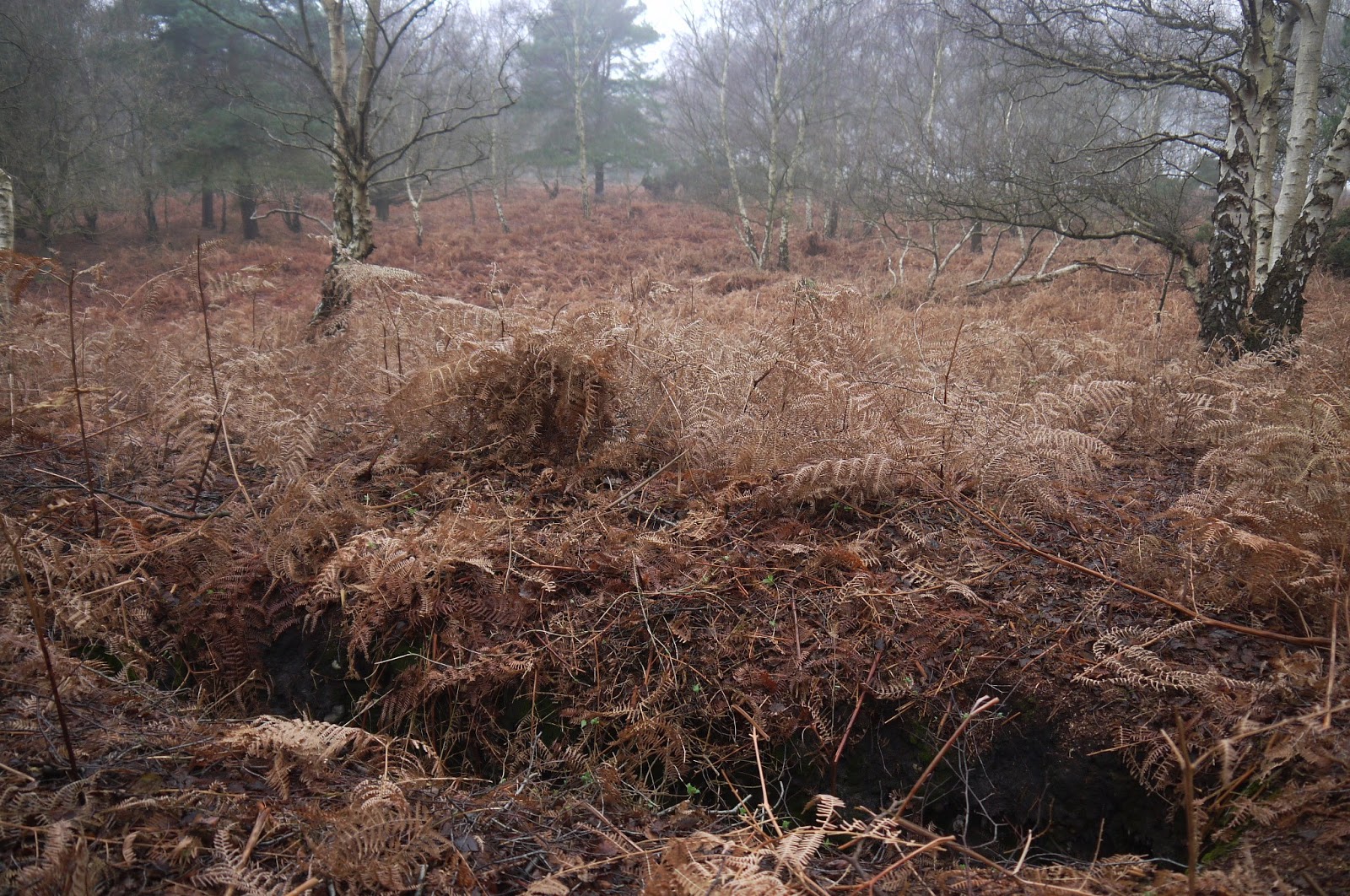 Above: Top GPS plot of trenches.
Middle and bottom - the general aspect of the landscape can be seen here with weapon-slits sited on the forward slopes to cover the ravines.

Number 4 group of trenches also has some crawl trenches and  also a large circular pit - perhaps to represent mortar / Granatwerfer position? The trenches are more or less sighted along the crest of a ridge, with some pits again on the forward slope to cover the ravine. 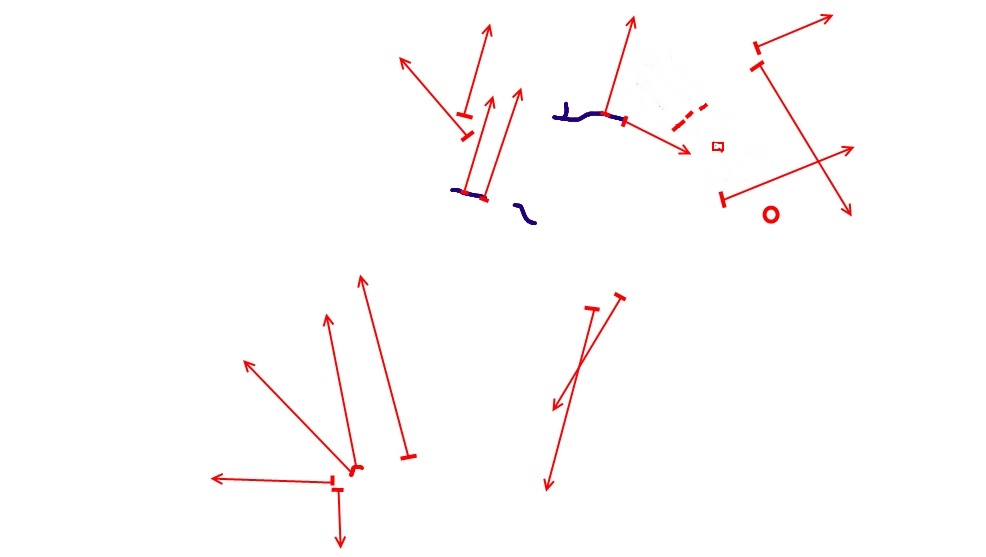 In summary, although all the above is speculation on the purpose of these practice trenches, if they were dug by men eventually sent over to fight in Europe, surely they are just as much a part of our WW2 Heritage as more obvious features such as the pillbox?
Posted by Dave at 11:20 No comments:

I must admit I enjoy wondering around looking for earthworks, quite often literally falling into them if they are covered in dense vegetation! You kind of feel in some cases its a race against time to record them before they disappear for good. They are obviously  much more ephemeral than the other surviving  icon of WW2 in Britain - the pillbox.

I've spent a few days recently mapping a number of slit trenches in one area of Westleton heath. I set out intending to 'mop up' what I thought were a few isolated trenches found on previous exploratory wanderings, but they turned out to be far more substantial than my initial findings suggested. The following posts will look at some some of these earthworks in more detail and I'll admit the following thoughts and interpretations are all guesswork! .

As I've said many times on this blog, the vast majority of earthworks on the Dunwich/Westleton complex of heaths are as a result of training. To date I have found no reference in War Diaries to any named Training Exercises in this particular area of the heath. It may well be that I have yet to find the correct document, or, it may well be that these earthworks were dug for platoon/company level training, of which details are seldom mention in War Diaries.

So why would trenches have been dug for training? I can only think of two reasons which are also laid out in 'Platoon Battle Drills for Offensive Defence' - The Instructors' Handbook on Fieldcraft and Battle Drill.

The first is to represent a German Fieldwork defensive position and perhaps demonstrate concealment and to consider methods of attacking it. The second would be to provide the platoon/company with practise in preparing a hasty defence position - i.e. part of Field Engineering for all Arms which new troops would need to learn.

The following image shows an overview plot of the trenches in the area that I've mapped - they seem to be in four distinct groups. All are also sighted on ridges, with some trenches sited on forward slopes to cover the valley / ravine. 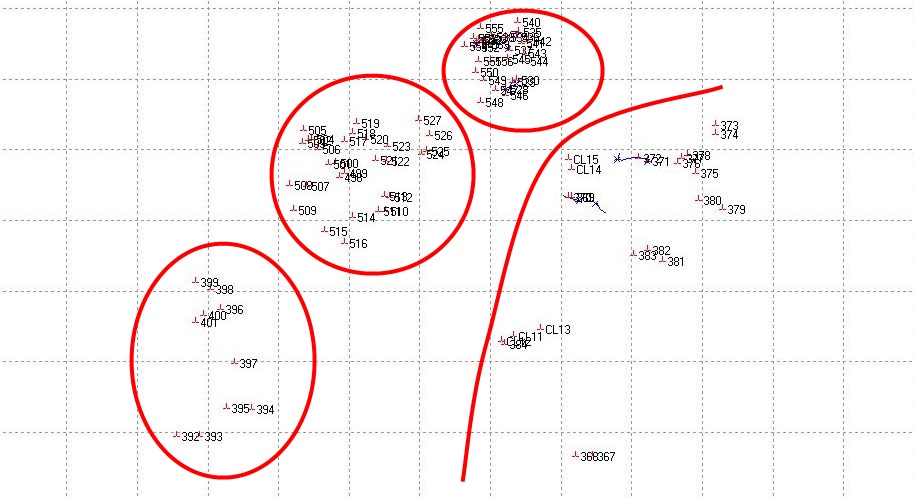 So first the earthworks - not surprisingly, both the British and Germans used the same style of Fieldworks in preparing a hasty defence position -i.e. usually two or three men weapon-pits sited in groups all with interlocking arcs of fire and all mutually supporting. Communication trenches, if dug at all, would only be to the Crawl Trench stage. The basic field works of a hastily constructed defence position were: 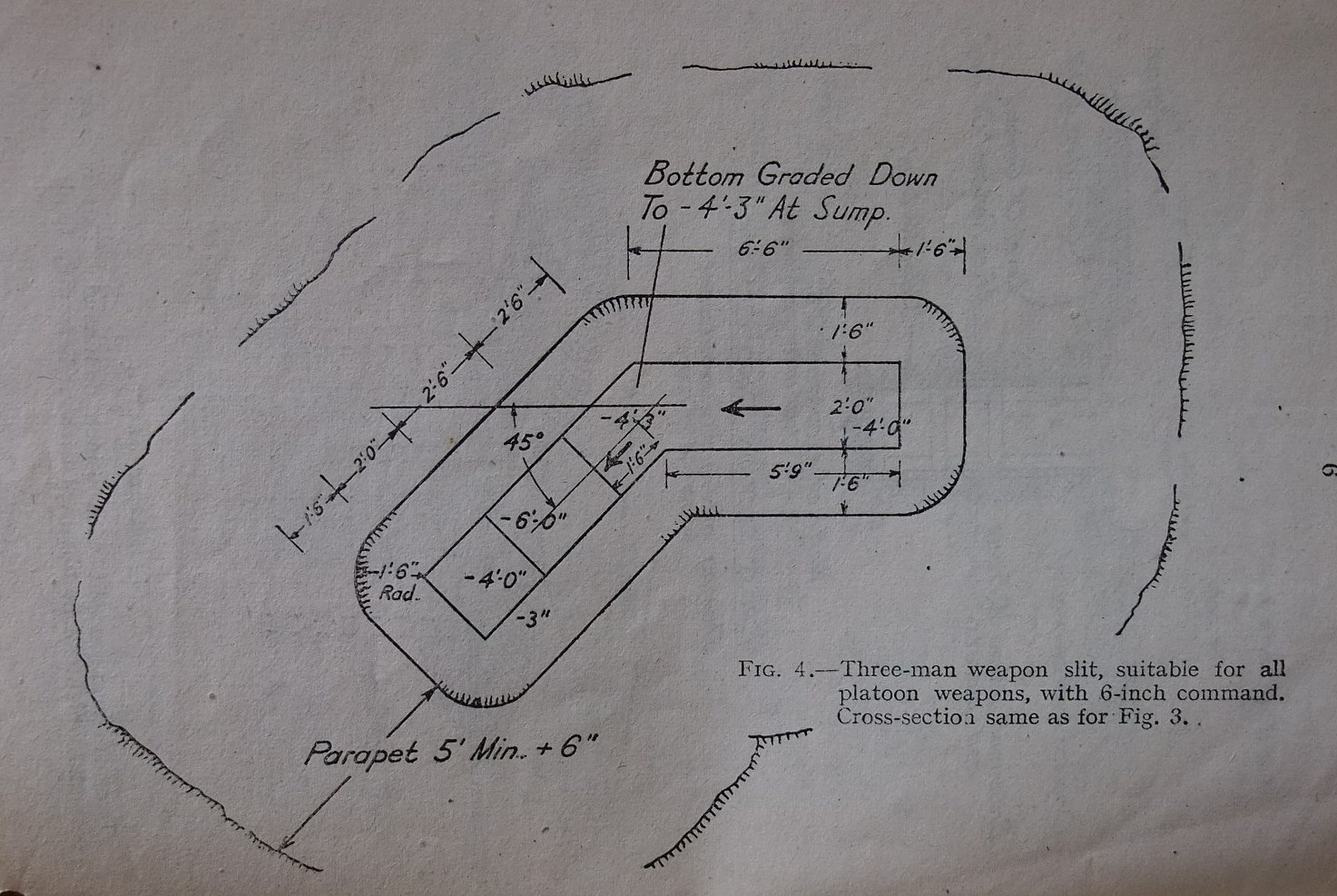 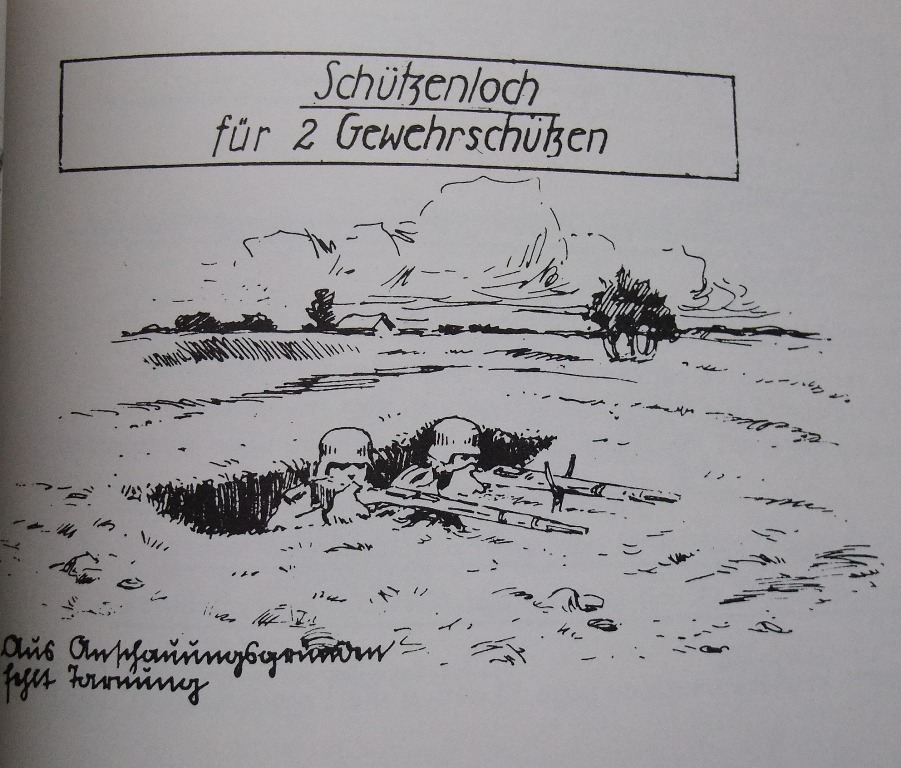 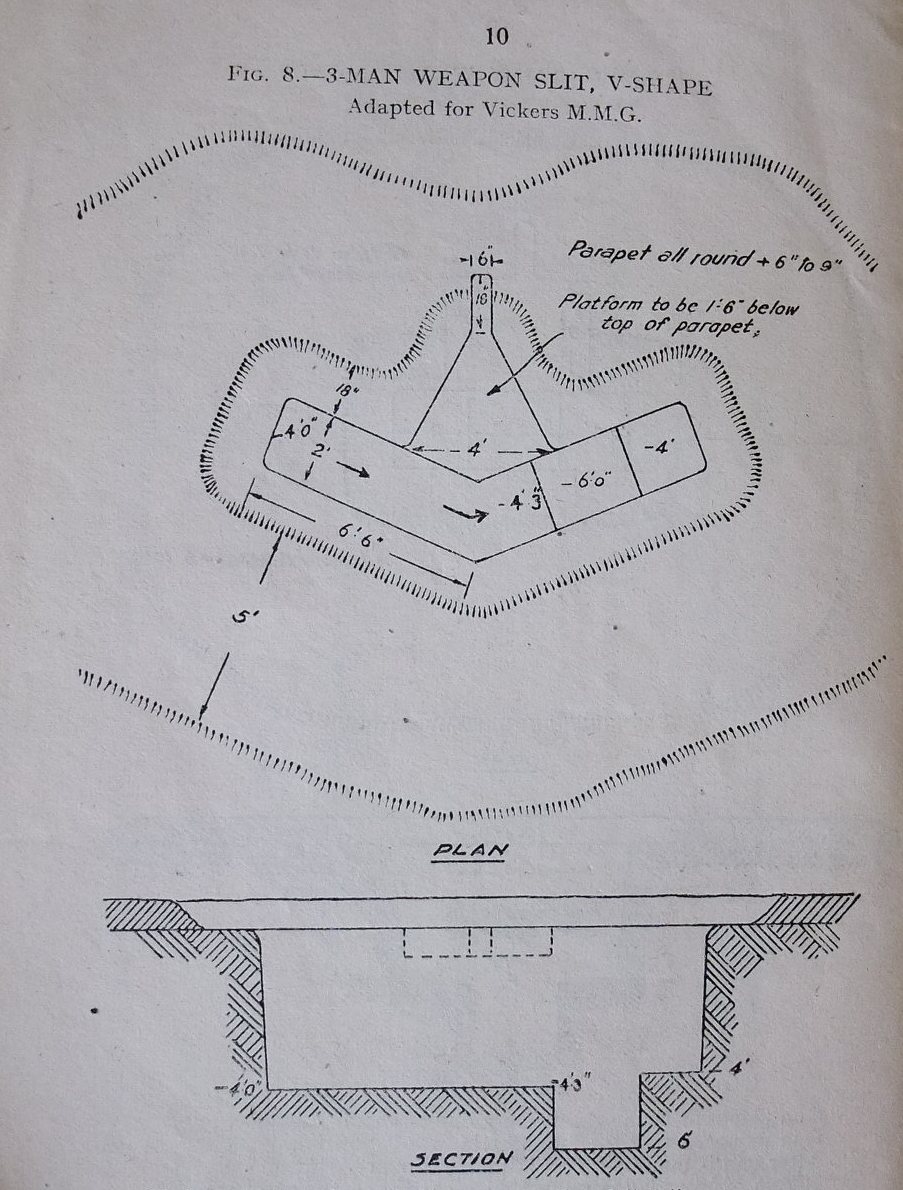 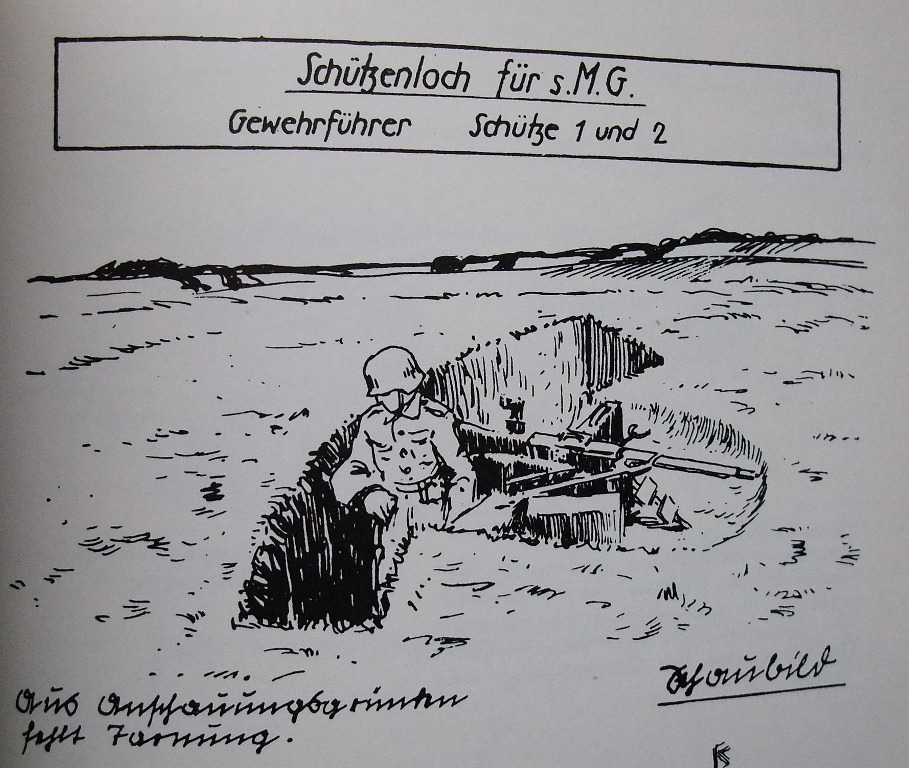 Above: The images illustrate how both the British and Germans used the same type of Field Works for hasty defence. The Germans used such field works in the defence of Normandy; for example the defences of Hill 112 were described as weapon-pits bristling with "Spandau's", connected by covered crawl trenches in one British Regimental History. The Normandy Bocage was also ideal countryside for constructing and concealing such defences.

In part two of this post I will look at the GPS plots of the four groups of trenches shown in the overview plot above.
Posted by Dave at 12:35 No comments: