Life in the GHQ Line

Although the GHQ Line did not run through Suffolk, the War Diary of one artillery Regt, that later moved to the Suffolk coast for beach defence, notes some of it’s experiences on manning the GHQ Line which makes interesting reading.

The Regt was posted to a section of the line in Cambridgeshire during July 1940, when 2 Corps issued orders to man the whole of the GHQ line (excluding pillboxes at Stapleford and Fen Ditton). Despite the fact that only a third of the Regt had arms, orders were given to man all pillboxes to in it’s sector prevent them falling into enemy hands!!

The Regt had to organize moving into new billets along the line and cookhouses had to be established.  During July 17th – 18th, thirteen 6 pdr anti-tank guns arrived for mounting in the pillboxes. However it was found that the pillbox embrasures had been made too small for the gun shield to be placed in position and had to be enlarged; 50 rounds per gun were issued. The Regt was still responsible for manning all the Bren and 2 pdr pillboxes, despite only having 6 pdrs!

As an indication of how short supplies were of everything at this stage of the War, basic equipment such as webbing, boots, anklets and clothing etc was still being issued.  Life must have been basic for the troops at this time as the War Diary notes that the arrival of transport (two lorries, two small vans and three cars) made simple things such as carrying out laundry, taking troops for baths etc much easier.

Firing practice took place at one of the pillboxes, using a large sandbagged target at 200 yards. The War Diary notes no misses and that the gun was easy to handle.

Camouflage works were also carried out on the pillboxes. Great care was also taken over the smartness and cleanliness of pillboxes, with a completion for the best kept pillbox! 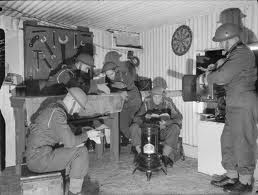 A well known image from a pillbox on the GHQ Line in Essex with a 6 pdr gun installed. It shows how troops tried to make the best of manning pillboxes.

Communication between the pillboxes and Battery HQ was set up with a pigeon service, the pigeons supplied by a local farmer and food from 2nd Corps. 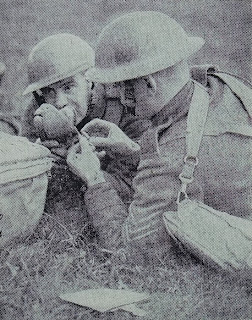 Above: Pigeon services were widely set up to carry messages between troops and HQ's. Will hopefully get around soon to posting more details about this on the main Suffolk Anti-invasion Defenses website.

Towards the end of August the part of the Regt received orders to move to the Suffolk coast for an operational role in beach defence.

The rest of the Regt remained on pillbox duty.  A War Diary entry for August notes that by now the men were armed with rifles, a few Lewis guns and Boys anti-tank rifles. By Sept, each detachment was cooking for itself and the pillboxes were more self contained then ever. Each pillbox had five days of preserved ration per man. When the code word Cromwell was issued this section of GHQ Line was fully manned. Great attention was paid to the tactical aspects of pillbox defence during this period. Preparations had to be made to receive a draft of 100 men from a Defence Battery who were to take over the pillboxes.


By October,thoughts were turning to making the pillboxes more hospitable for winter. Small cookers and stoves were installed.

On Nov 10th the Regt was fully withdrawn from the pillboxes. All guns were taken from their mounts and put into mineral jelly. The Regt was concentrated in Cambridge but had to keep the pillboxes for a while longer as the Defence Battery was assigned a coastal defence role instead.

In December the Regt was finally relived of the pillboxes.


So a short snapshot of life for the troops at the height of the invasion scare; similar situations must have been repeated along all stretches of the GHQ line completed, and at all beaches where a landing was considered possible.
Posted by Dave at 08:07 No comments: