The following set of images are of a artillery observation post (near Beach Farm, Benacre) with a Suffolk Sq Pillbox nearby. The artillery OP has 15" thick walls and a 12" thick roof; it may have been subjected to gunnery practice (as in the last two pillboxes in my last post) as there is damage to the roof. The Suffolk sq pillbox is again constructed with conventional shuttering as opposed to the pre cast blocks used for shuttering found further south. The concrete weapons shelf is also continuous as opposed to  a separate shelf for each embrasure.
Top: Suffolk Sq pillbox and Artillery Observation Post in background
Second down: Rear  of Suffolk Sq Pillbox showing blast wall
Third down: Artillery Observation Post
Fourth down: Kessingland from Observation Post
Bottom: Another Suffolk Sq pillbox seen from Suffolk Sq Pillbox. 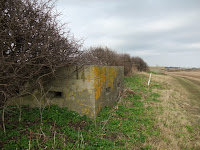 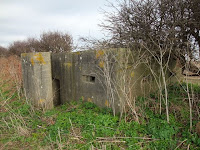 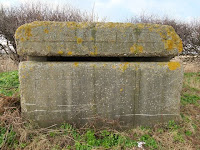 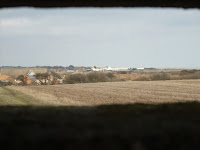 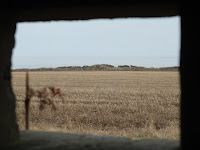 Well, did not make Eastern Command Line due to distractions - its at least a 1 1/2 hr drive, so visited Benacre area instead. Many pillboxes in this area so will detail the visit in a few bolgs. First up are a couple of Suffolk Squares, which are as far as I can see unrecorded (at least they are not on the DOB data base I've got). Both are constructed using wooden shuttering as opposed to the pre cast blocks you find further south. Both have obviously been used post invasion role to test direct weapons fire against embrasures. 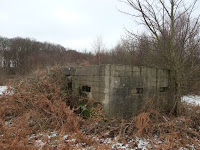 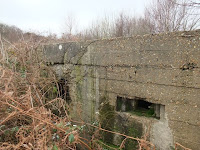 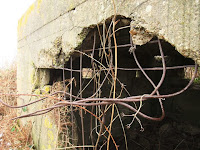 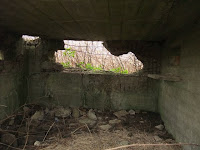 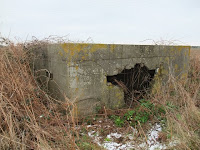 Another pleasant sunny afternoon at Westleton. I was not intending to publish a post on this visit as I knew the weapons-pits I was mapping were only shallow depressions. However a few pieces of pottery I found I thought were worth a post on the blog.
The top photo show the pottery stamps on two items found. Both were from potteries in Stoke - Booths Ltd (1891 - 1944) and George Jones & Sons (1873 - 1951, showing their characteristic crescent mark). Besides 303 cartridges they are the first datable evidence I have found (not that you need datable evidence its 1940-45!).
Middle photo is the Booths Ltd piece
Bottom photo is the most interesting earthwork mapped today - two weapons-pits (in red) linked by a crawl trench (in blue).
Weather permitting will visit part of Eastern Command Line tomorrow. 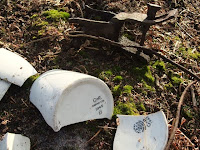 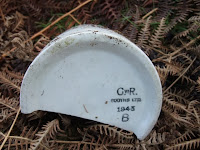 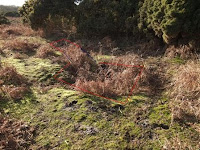 
Mon 8th Feb
A miserable grey day on the Suffolk Coast seemed an ideal opportunity to revisit Waveny Forest. Struck gold dust this time. Right from the start I want to emphasise that I found out about this area from a post on WW2 Talk by R Thomas (EH), so the details posted here are not my original discoveries (you can see his post on WW2 Talk, Home Front Forum although you will have to join to see his sketches of dugouts etc).
So what did I find? Many dugouts (all obviously lacking roofs, but much deeper remains than I have found in Suffolk), four gun pits aligned on the St Olaves Bridge, many weapons-pits and slits and a crenellated section post. Most remarkable although are the dugouts with a concrete roof, as Roger says in his post the condition of the wire netting revetment is remarkable. Also in evidence are many concrete bases for huts and man holes for a sewer system, which local dog walkers told me was the American camp area which apparently also included a cinema! The condition of the earthwork remains matches the best I have found in Suffolk so far, which is why I was keen to visit the area, to get as many details and measurements as possible of WW2 earthworks.
Top photo: Part of a twin dugout linked by a trench which would no doubt have been covered. The entrance is clearly visible. The roof would have most likely have consisted of timber supports to  corrugated sheets with earth and perhaps rubble to act as a shell buster. The dugout(s) have a number of weapons-slits on one side; in this respect it's similar to the one on Minsmere Dunes although the dugout itself is far more substantial.
Middle top: Entrances to underground dugouts, presumably ammunition storage (TG460 003).
Middle bottom: Inside of dugout - note angle iron supports and wire netting revetment.
Bottom: sketch of plan of twin-dugout with weapons-slits with, insert a plan of one of the four gun pits which has slit trenches nearby (presumably as shelter for the gun crew in case of aerial attack although the slits are far nearer the gun position than recommended by the field engineering manuals). 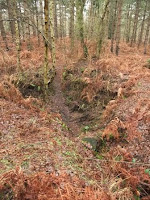 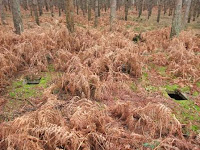 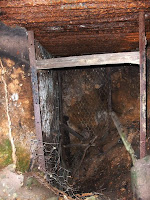 Over the border into Norfolk today to visit Waveney Forest - looking for Waveney Redoubt which sounds similar to the one at North Warren - didnt find it but many training earthworks in the forest including a possible LMG emplacement (although I'm not fully convinced!). 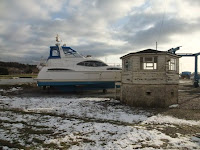 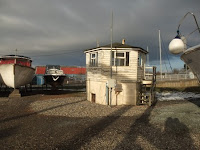 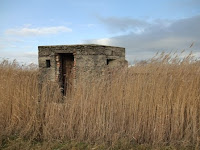 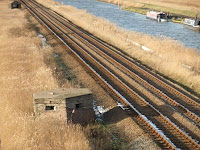 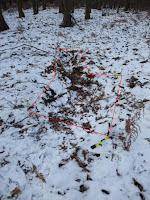 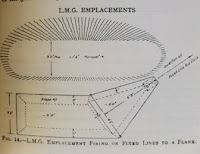