Ended up today in the area just south of Kessingland ('The Denes' on a modern OS map). This area used to known as Benacre Ness (Ness being a small headland) but there has been much erosion here since the end of the war. However a good selection of defences remain in the area (I have already posted a blog on the observation post and a couple of the pillboxes).
The first photo shows a remaining snapshot of the 2nd War landscape. The water body is the only remaining gravel extraction pit remaining (originally three) which was dug during the war in order to obtain a supply of gravel which was used to construct the defences in the area (pillboxes, tank blocks, coastal defence battery, roads and tracks). This probably explains why the Suffolk Square pillboxes in this area appear more solidly built than those further south  (which used pre-cast blocks as shuttering). The ditch was known as 'The New Cut' and originally extended to Benacre Broad. Although it shows up on aerial photos during the war, I'm unsure if it was dug as an anti-tank ditch or is pre war. Even if pre-war it would have provided a ready-made anti-tank ditch. The pillbox in the background (left) is one of several remaining in the area, built using the aggregate dug up from the pit. The second photo shows the remains of another Suffolk Square (the blast wall), clearly visible in dunes in wartime aerial photos!
Third photo shows some of the remaining anti-tank cubes - last time I visited just a few tips were showing through the shingle but the strong NE winds have eroded some of the shingle ridge. Last photo shows a destroyed Suffolk Square, also clearly visible on aerial photos with supporting trenches. 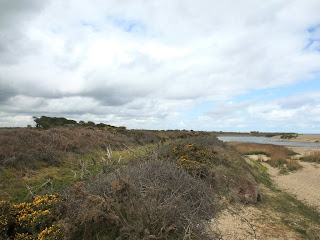 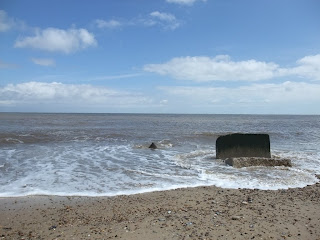 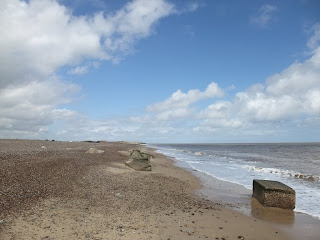 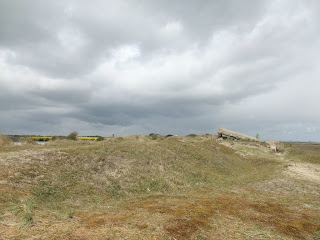