Two type 22 pillboxes still remain from Wilford Bridge WW2 defences and both are of interest. One still has traces of a supporting fire trench visible - both pillbox and trench are visible in an aerial photo (dated 1944) in English Heritages's 'Suffolk's Defended shore'. The pillbox has an L shaped blast wall which is tied into the pillbox with a metal rod - never seen this before. One of the embrasures is also damaged.
The second pillbox is identical except it lacks the metal tie rod and also has a second low level embrasure in the blast wall, again something I've not seen before.
On the north east side of the bridge, a new post has been dug into the ground and I suspect this short screw picket (see photo below) was found while digging! One use of these short pickets was in the construction of 'double apron' barbed wire obstacles - they were used for anchoring the diagonals (see website for a diagram of a 'double apron fence').
Tomorrow some notes on a pillbox location and design which I dont think have been 'officially' recorded before.
Top: First of the two remaining type 22's
Second Down: Close up showing remaining camouflage paint
Third Down: Metal tie rod between pillbox body and blast wall
Fourth Down: The pillbox viewed from the north side of the River Deben
Fifth Down: Second of the two remaining type 22's
Sixth Down: A second low level embrasure in the blast wall
Bottom: Short screw picket 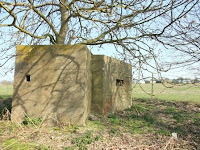 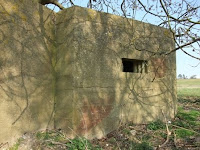 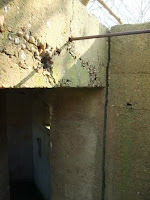 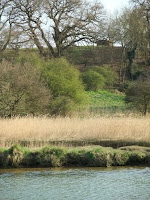 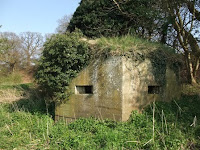 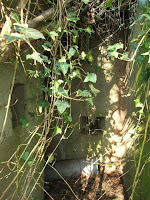 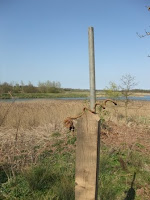