On the way back from Minsmere, I walked the tide line and came across quite a few naval scaffolding brackets (see photo). But perhaps most significant was the remains of a scaffolding pole in concrete - part of the base for the scaffolding obstacle set in quick setting concrete? (see website and Bert Kennell's account). Also had a quick look around Goose Hill again and found the following .303 cartridges:
Headstamp R L :-Royal Laboratory, Woolwich Arsenal, Kent - one fired by rifle (1928), two fired by machine gun (1928 and 1941) - the 1928 mg fired round must have been either vickers or lewis as the bren was not around then!
Headstamp GB :- Greenwood & Batley, Leeds, fired by rifle (1933)
Also two .300 - headstamp R  A :- Remington Arms Co, Bridgeport, CT; dates 1941 and 1942.
The bottle stop is from a Cobbolds Ale Bottle. Cobbolds was founded in Essex in 1727 and had a big presence in Ipswich. It was acquired by Ridleys Brewery in 2002, itself bought by Greene King in 2005. The attached cartoon shows a HG recruit hurling Cobbolds Ale bottles at the Germans, having brought along a case of Cobbolds Ale by mistake instead of a case of Molotov's! The two bullets are one each of a .303 and .300 (the one on the left) - the first .300 I have found.
First image: Scaffolding brackests
Second image: Scaffolding pole set in quick setting concrete?
Third image: Cartridges and Cobbolds bottle stopper
Fourth Image: HG cartoon
Fifth image: Some cubes at Sizewell almost completely covered by shingle - they appear and disappear depending on the amount of shingle deposited/eroded!
Sixth image: Suffolk Square, Sizewell Cliffs 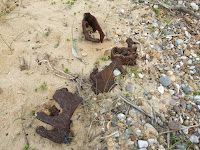 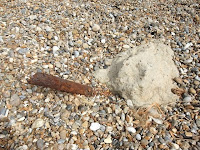 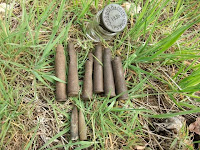 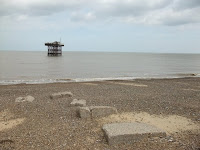 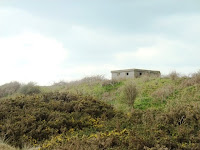