Firstly I accept that I am going to labelled a first class anorak with this post. Declaring you have an interest in pillboxes is bad enough but tractors etc?? Anyway the reason for this post follows on from my visit to the TNA last week - highly successful with the highlight being the potential matching of many earthworks I found last winter to a training exercise held in 1943 (that's for future posts though!).
Anyway back to tractors - in one War Diary of Engineers involved firstly in the constrcution of anti-tank ditches on the GHQ line in Essex, before moving to Suffolk, a list of mechanical equipment was given. So I thought this post (and one or two subsequent) may be of interest to give a flavour of the machinery used to construct the anti-invasion defences in Britain. This is part 1 - the D4 and D8 tractor.
No 2 section 135 Mechanical Engineers commenced work on the GHQ Line in Essex on June 18th 1940 with:
This post will cover the D4 and D8 tractor and grader. I hope to do the RB 10 and 19 in future posts. I have yet to find out what a Smith Shovel is - if anyone knows I would be extremely grateful if you would leave comment.
The most widely used 'caterpillar self-laying' tractor equipment by the Army during WW2  were the D4, D6, D7 and D8 tractors.
So sticking to the D4 and D8 mentioned in the War Diary, here is the technical information (you may want to hit the refresh button on your browsers now!!):
D4
Horse Power: 35
Speeds forward:
1 - 1.7 mph; 2 - 2.4 mph; 3 - 3 mph; 4 - 3.7 mph; 5 - 5.5 mph
Speeds reverse:
1 - 1.9 mph
Drawbar Pull: 7,852 lbs
Fuel Tank capacity: 25 gallons
Weight: 10,240 lbs
Ground Pressure 860 lbs./sq.ft 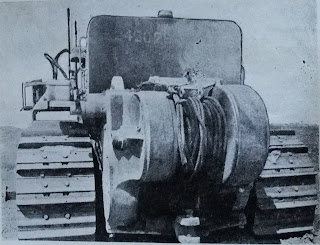 Above: D8 tractor with towing winch
Bulldozer refers to a special alloy high tensile straight steel blade, concave in the vertical plane. A bulldozer blade is permanently set at right angles to the centre line of the tractor. It can be lowered or raised in a vertical plane and could be used for pushing or dozing soils etc in forward direction. It was somewhat limited in its scope compared to the Angledozer which could be set at an angle up to 30 deg or tilted. 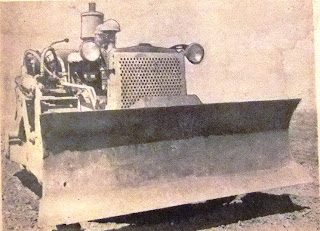 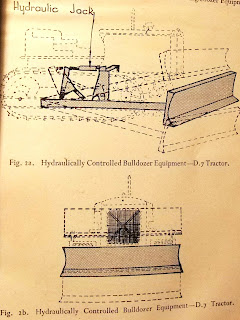 Above: Hydraulically Controlled Bulldozer Blade (photo shows it mounted on a D4 tractor, illustrations on a D7)
A grader was similar to a dozer blade but lighter. The War Diary only notes "D8 tractor and grader" so I assume this refers to an elevating grader No48 which was most likely to be towed by a D8. This machine was built up over a stout girder mounted on heavy iron wheels with steel tyres. A wide carrier belt was mounted on the centre of the arch, at right angle to the direction of travel. A steel plough disc loaded soil onto the conveyor belt which which could be discharged into accompanying trailers. A No 48 Grader needed a tractor with up to 120 HP to tow it.

Above: An elevating grader, towed by a D8 tractor, loading Athey Wagons in tandem, drawn by a D8 tractor.
Anyway that's the highlight of the technical details.  I am not sure how these tractors would have been used in anti-tank ditch construction but they were certainly used later for levelling sites for camps and aerodromes.
A plea to anyone who may know the answer to this question which would be useful for Part 2 of this blog:
What is skimmer shovel equipment?
Posted by Dave at 13:08 No comments:

Had a couple of hours spare this Sunday so spent a pleasant sunny afternoon at Westleton. Decided to check some bare ground again, expecting to find a few bits and pieces after any rain (or what little we have had this year) since my last visit in spring.
Found another mass of 303 cartridges, all fired by a Bren Gun. Nearby were some badly eroded weapons-pits, which next to I found another few 303's.
In the main group I uncovered 134 fired cartridges, many more undoubtedly still present just under the surface. Of these 109 were manufactured by Winchester Repeating Arms and dated 1942; three by Defence Industries, Verdun, Canada, dated 1942; two by Greenwood & Batley, Leeds, dated 1940; three by ICI, Kynoch Standish, nr Wigan, 1940; two by ICI, Kynoch, Yeading, Middlesex, 1941; one by Royal Laboratory, Woolwich Arsenal, Kent, 1940; 14 unidentified and three I am puzzled about. The stamps on these cartridges are RL 28 and K 29. I assume that RL and K refers to the manufacturer (Royal Laboratories and ICI Kynoch) and 28 and 29 the date of manufacture (i.e. 1928 and 1929). Both these dates would have been even before the Bren Gun was invented! My question is why was such old ammunition  still being used in 1942/43? 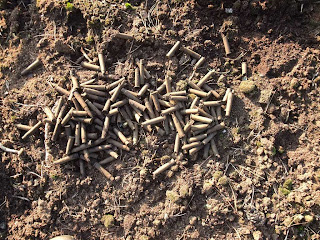 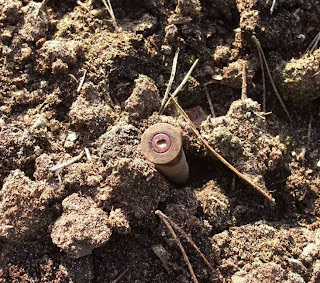 Above: the cartridges found this Sunday. Note the purple ring on the primer anulus on the cartridge on the bottom photo (indicating a normal ball round) still clearly visible after all these years.
I assume that these cartridges were fired as part of the new Battle Drill training (rather than just firing at targets as on a range). The Instructors' Handbook on Fieldcraft and Battle Drill, issued by C.I.C Home Forces, 1942,  emphasise the importance of using live ammunition in Battle Drill training. I am exploring the possibility of a third website, Military training in Suffolk, WW2, but with two other sites currently 'works in progress' I am not sure if this a good idea just at the moment! Anyway I am building up a good data base of evidence of training. 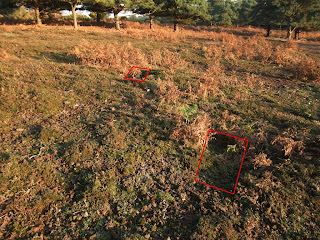 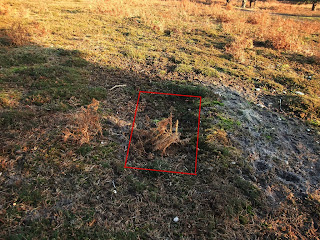 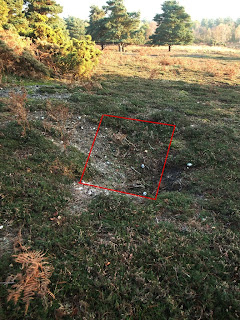 Above: Traces of weapons-pits clearly visible in the shadows of the afternoon sunshine.
Another visit to the Archives this Wed/Thur with far more documents that I want to look at than I will have time for!!
Posted by Dave at 13:53 3 comments:

This post is a good illustration of when recording by GPS can break down. The remains of the camp for this Diver battery is largely under tree cover which certainly affects the accuracy of GPS. Also in many cases only part of the concrete bases on which huts were built upon are visible - the rest hidden by years of leaf litter. The reduced accuracy of GPS under tree cover and having to guess some of the corners of the concrete bases means only a best guess of the outline of the camp can be produced. 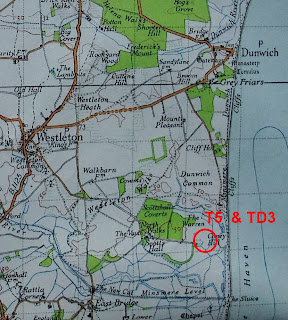 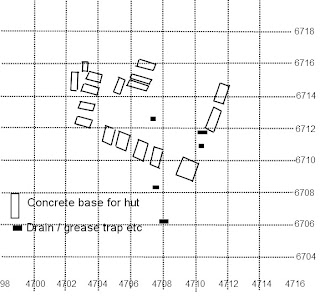 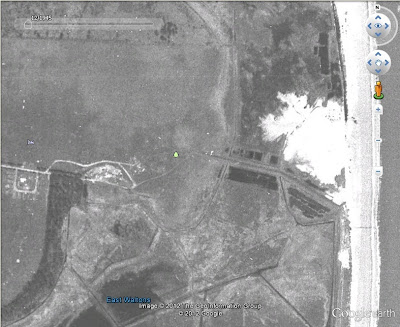 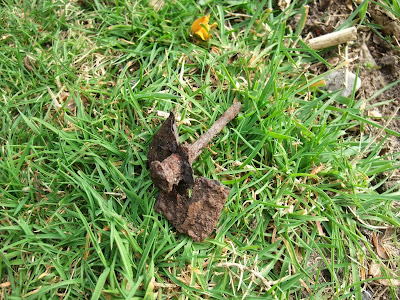 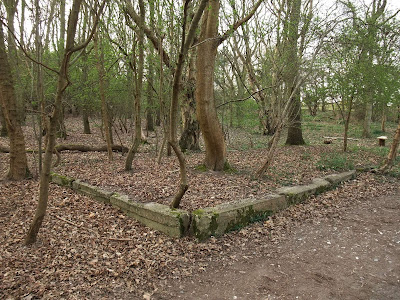 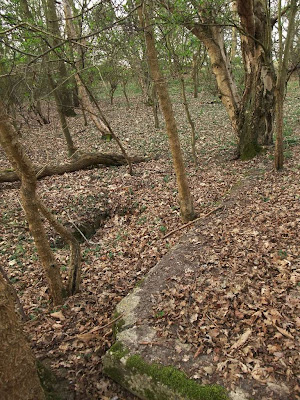 Above:
Image 1: Location map of Diver Battery T5 and LAA Battery TD3
Image 2: Aerial photo of battery, 1945. The domestic camp and gun positions can be clearly seen. The gun position is in the area  just to the east of the current RSPB visitor centre.
Image 3 - GPS plot of the remains of the domestic camp, Diver battery T5.
Image 4 - Nail used for fastening corrugated iron sheets to wooden battens.
Image 5 and 6 - some of the remains of concrete bases on which  huts would have been erected upon.
Some interesting remains of the sewage / sullage system can be seen  including part of a 9" glazed stoneware pipe (if you are into drains!!). 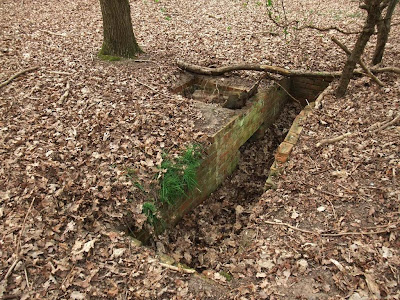 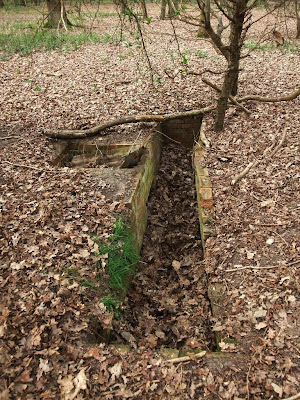 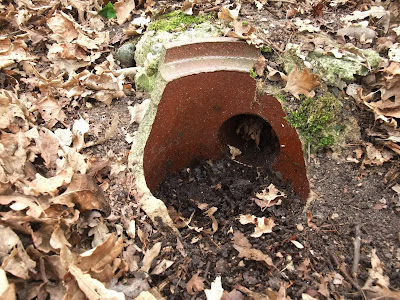 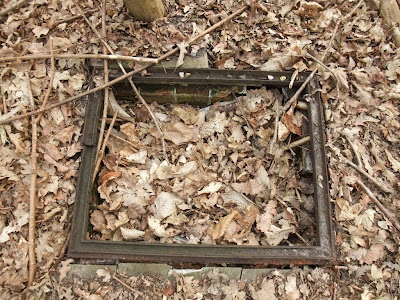 Above Images - remains of the camp sewage / sullage system.
The battery itself was equipped with four 3.7" MkIIC, Predictor AA No. 10 and Radar AA No.3 Mk V. The location statement of Diver batteries for Oct 1944  notes a Light Anti-aircraft battery associated with T5 -  battery TD3 equipped with 8 X 40mm and two 3.7" MkIIC.
I must admit I have done no research to date on the activity of these Diver batteries - I am for the moment just concentrating on searching for their remains. This will have to be something I rectify in the future!
Posted by Dave at 13:09 No comments: 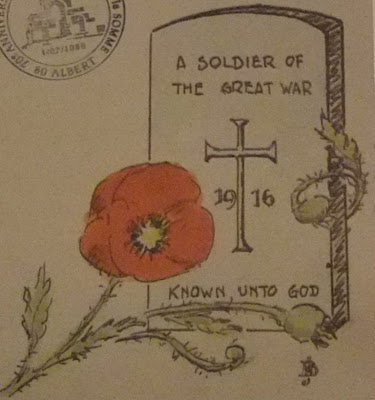 Never got round to looking into these, visited during the summer, Ramsholt Churchyard. Today seems a good time for this post. 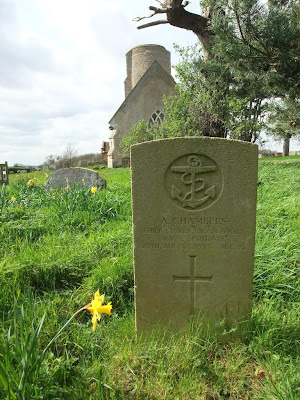 HMS Spartiate was RN establishment based in St Enoch Hotel, Glasgow. it was responsible for the security and safety of the River Clyde. A large number of motor boats were commandeered to form the River Clyde Patrol, crewed largely by local yachtsmen, many operating as volunteers. Chief Stoker Chambers died of illness. 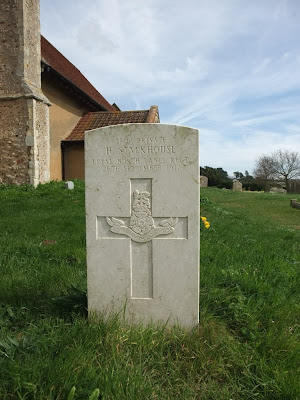 I have not been able to find anything out about Private Stackhouse. The CWGC lists his age as unknown.