Well, as I said on my first Somme post, this was actually the start of my hols, travelling up to Birmingham. First stop was Elmswell on the east branch of the Eastern Command Line. Here the anti-tank obstacle is a steep railway embankment. At an old crossing point are a number of anti-tank blocks (so called 'pimples') with much larger blocks which could take a rail on the actual crossing point. I counted 21 on the north side and 18 on the east (M Osborne in his book 20th C. Defences in Suffolk gives approx 30 each side so dont know if I missed some or some have subsequently been removed).
Next stop was West Row where I basically followed the walk in W Foot's 'The Battlefields That Nearly Were'.
Here the anti-tank barrier on the Eastern Command Line is the River Lark. A number of shell proof type 24's can be seen as well as a type 28 and other defences guarding a crossing at Jude's Ferry. The type 28 has been modified to take the six pounder gun.
First and second image: anti-tank pimples, Elmswell. The larger blocks for the crossing can be seen in the first image. They have a hollow through the middle in order to take some form of barrier (prob a large RSJ)
Third image: 'pimple' - from Field Defences and Obstacles 1951. Must admit did not have my tape measure so do not know how if the dimensions of the Elmswell pimples conform to the manual.
Forth image: Type 28, West Row
Fifth image: Holdfast for 6 pounder gun
Sixth image: war time image of a six pounder in a pillbox 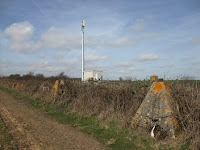 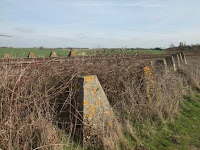 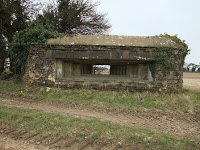 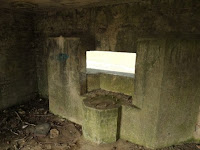 Some more on the West Row area hopefully tomorrow.
Posted by Dave at 12:03