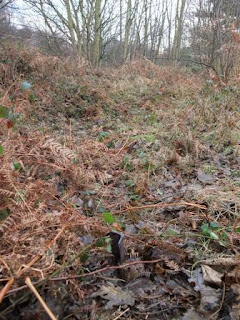 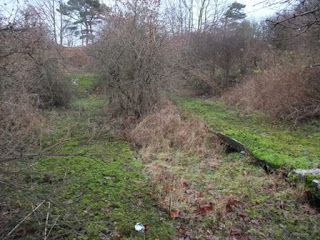 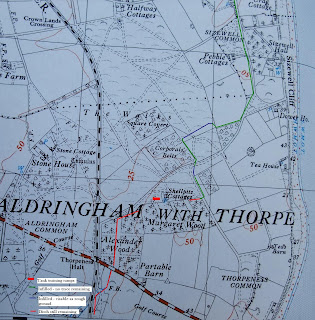 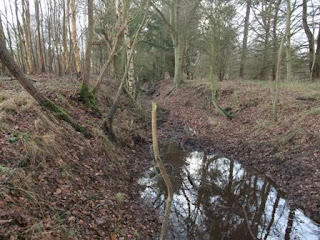 December 31st
Decided to visit the anti-tank ditch at Aldringham Walks this afternoon. It was constructed between late 1940 and early 1941 and ran from (north to south) Sizewell to the north of Thorpeness Mere. Some of its length is still visible today (see map and bottom photo)). The war diary of 9th Cameronians (15th Div) mentions the construction of the ditch in Margaret Wood (vicinity of No 12 Platoon, B Coy).  The diary also mentions a pillbox being destroyed by the RE in No 12 platoons area, but no luck in finding any remains this time. The diary would also indicate the ditch was a combined obstacle with Z1 scaffolding. The top left photo shows the remains of a weapons pit/shell slit; six pieces of angle iron revetment still exist - one of the pieces is clearly visible in the photo. Perhaps this is part of No 12 platoons position. Many years ago when beating up the young woodland I found a Yorkshire billhook with the WO arrow dated 1946, so this area would appear to have been occupied right through and just after the end of the war.Near by (second photo) are some concrete ramps, according to local knowledge used for tank training in D Day preparations.
Posted by Dave at 08:57