NMR Visit and other things

Had a couple of days at the National Monuments Record centre in Swindon last week looking at oblique aerial photos of the Suffolk Coast taken during WW2. Have already found some anti-tank cubes at Thorpeness that I was unaware of as a result (despite living in this area for the past 15 yrs!). Took over 300 photos (of photos!), but cannot post any as yet as copyright remains with the NMR but when I've had a good look through them all I'm hopeful of getting permission to put some on the website to illustrate particular points.
Took advantage of a beautiful sunny day here on Sun for a walk at Shingle Street, probably one of my favourite spots on the Suffolk Coast. Had a look in a pillbox which I had not been able to get into the past due to bramble (still had to fight my way in!) and was rewarded with some good remains of a turnull mount. Also some remains of Z1 naval scaffolding along the beach.
Stopped off at Wilford Bridge on the way home - many WW2 remains, will post over the next few days.
Top photo: some of the nine remaining anti-tank cubes at Thorpeness - not recorded on the Defence of Britain data base as far as I can see
Top middle: remains of turnbull mount in a Suffolk Square, Shingle Street
Bottom middle: remains of naval Z1 scaffolding, Shingle Street
Bottom: screw picket and type 22 in background, Shingle Street 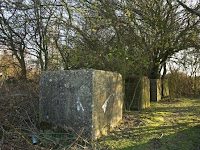 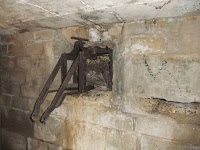 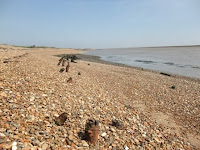 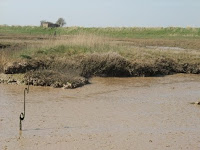