A continuation of the ammo theme today. Not all found on this Tue, I've decided to put the best images as one post. First image shows a British 'toffee apple' trench mortar bomb. Second is a British Mills bomb and German 'pineapple' grenade. Third image shows a German 'egg' grenade with a cleaning rod for a British Webley Pistol - a most unusual find. Forth image shows a pile of 75mm mienwefer shells (literally mine thrower). Some still had the protective cap on the fuse and traces of wood on them - presumably the wooden box they were originally stored in. No doubt a forward dump of ammunition or perhaps even a mortar position in support of troops fighting in High Wood. Next image clearly shows the cordite charge in a shell. Following image, what would be the reaction of your local Rights of Way service if this was next to a Public Footpath sign!? Lastly a pic of a shell taken near Montauban I think.
I could go on (indeed still have a couple of shell photos for a future blog entry on this Somme thread) but its probably time to move on.
So tomorrow, details on perhaps the best field find of the trip, by my brother, at Factory Corner. For anyone who is wondering, I should like to state these are all finds on field surfaces, we don't metal detect  - its illegal in France for a start and also highly disrespectful unless carried out in proper archaeological research. 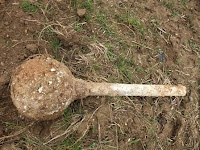 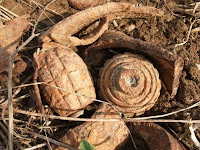 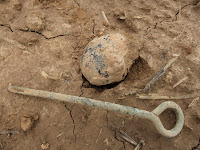 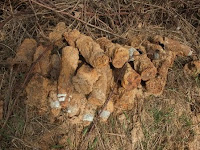 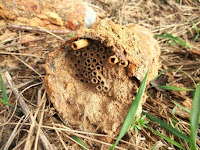 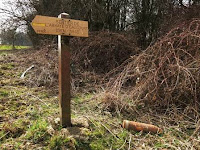 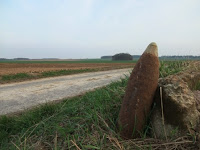