Today's walk started off from Flers and took in Bulls Road Cemetery (1st photo), Gueudecout and Factory Corner. A close inspection of a collapsed dug out in  a field (Factory Corner - another hazard for your Somme tractor driver! - second photo) led to the discovery of an Australian soldiers i.d disk by my brother. This is in the third photo along with a couple of other items. So getting these out of the way first, the 'wing' is actually part of a Picklehaube  (the leather German helmet with a spike on top) badge plate. The bullet with cartridge is German, but the bullet, unlike every other German bullet found to date (bullets are everywhere in the ploughed fields of the Somme) is not badly corroded. We suspect it is a 'K' bullet - the German armour piercing bullet used against metal sniper shields and later tanks; if so its a very rare find! The small cross would have belonged to a soldier, he would no doubt have purchased it from the local population who would have made such items to sell.
But back to the disk. It belonged to Walter Scott, born in Kirkcaldy, Scotland who moved to Australia at some point. He enlisted on 7/8/1915 and was described, on enlistment, as 5 ft 8, 142 lbs, with a dark complexion, brown hair and blue eyes.  He embarked from Australia on 7/2/1916 on H.M.T 'Miltiades' and was initially posted to 9/27th Battalion. He was allotted to 4th Pioneer Battalion on 5/3/1916, being promoted to Corporal on 8/8/1916. Then promoted to temp. Sergeant on 17/3/1917 and full Sergeant on 26/6/17. He was the promoted to temp. Company Quarter Master sergeant on 3/11/1917 and full CQMS on 3/1/1918. I'm glad to say he survived the war, being discharged from the Army on 7/10/19. His record includes a server reprimand for failing to carry a gas mask and insolence to an Officer of His Majesty's Forces on 18/1/1918!
Being a pioneer, its tempting to think he may have even constructed the dugout, or at least sheltered in it! 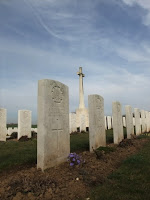 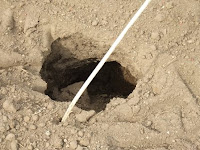 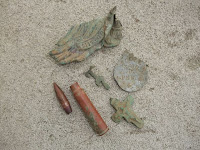