Some interesting finds recently in the area to the rear of Walberswick. During 1940 defences along the Suffolk Coast had only really been developed to a linear strip along the coast line with platoon localities sited to cover the main exits from the beaches. With the relief of 55th Div by first 42nd Div and then 15th Div in 1941, work was stepped up on developing more depth to the defence. The image below shows the platoon localities of 2/4th South lancs (55th Div) and 10th Cameronians (15th Div). As can be seen a chain of defences had been constructed in the rear of Walberswick by 1941.

Platoon localities 1940 and 1941
In addition an anti-tank ditch had been dug just to the west of Westwood Lodge (or Blythbrough Lodge) from Westwood Marshes to the Blyth Estuary.
In the area of Westwood Lodge, a large ditch can be seen -  presumably part of the anti-tank ditch and I came across a section of trench overlooking the ditch. This is in the area of No 16 platoon , 10th Cams.
On the Estuary side, near Hill Covert I came across a remarkable survival - almost certainly a section post dug to full fire trench / communication trench specifications. I think it consisted of four sections of fire trench linked by communication trench. This was in the vicinity of No 18 platoon (or possibly No 7 platoon).
Surviving earth works with a defence role are extremely rare - much more common survivals are those with a training role. If both these are genuine defence works an interesting question arises over the difference in the two sections of trench. The one overlooking the ditch is either heavily eroded or dug to much narrower dimensions than those in the Hill Covert area. Perhaps the section overlooking the ditch was an infantry observation post instead of a fire trench?
Finally an interesting collection of what appear to be weapons-slits and pits around the tumulus near the small car park on the B1387. Attached is a GPS plot with main field of fire marked for each trench. No idea if these are WW2 earthworks and,  if they are, whether they had a defence or training role. Such is the nature of field work, finding holes in the ground, with no solid documentary evidence to state their purpose! 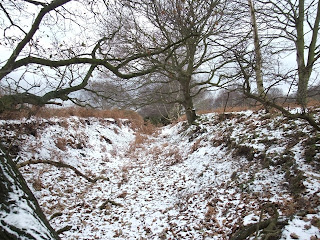 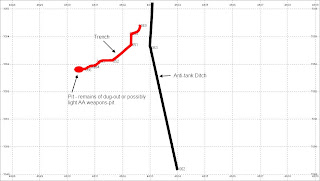 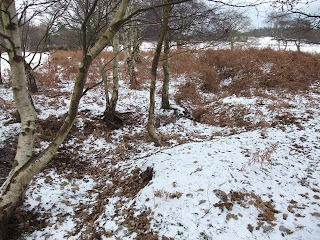 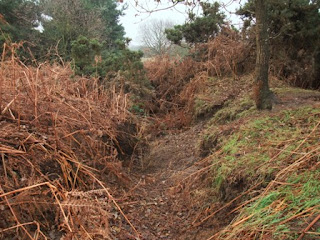 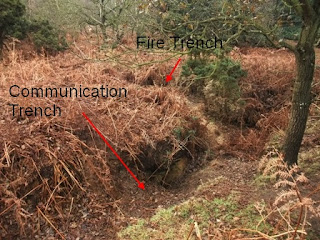 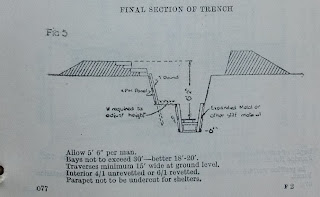 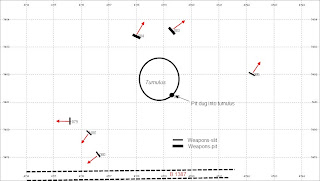