Ever since obtaining a copy of Richard Bass’s book The Spirits of the Sand, I’ve wanted to visit this area. Like many other people our holiday plans changed this year, and this provided the opportunity to get to see some of the remains of the American Assault Training Centre (ATC) in the Woolacombe area on the beautiful North Devon coast. 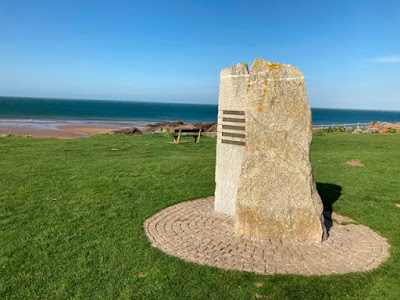 Above: Memorial to the ATC, Woolacombe.

The ATC was set up to train the American divisions selected as assault divisions for the D-Day assault landings. It had been hoped that the major part of this training would have be carried out in America, with a number of Combined Operations Training Bases established in the UK to serve formations in their vicinity to prevent large scale movement to and from bases. Although all US divisions received some form of training in the assault of fixed defences in America, the complexity of the proposed landings soon made it evident that the Americans would need facilities in the UK to test new ideas and techniques and apply them to the training of troops. Colonel Thompson was given the task of establishing such training facilities in England, and the ATC was born, officially activated on 2 April 1943. The site chosen for the ATC was the Woolacombe – Appledore area, an area originally considered by the British for Combined Operations training but rejected because of the frequent stormy seas. However, it was to prove to be the perfect site for the Americans, representing what they would find on the Western Coast of Europe at Omaha and Utah beaches. 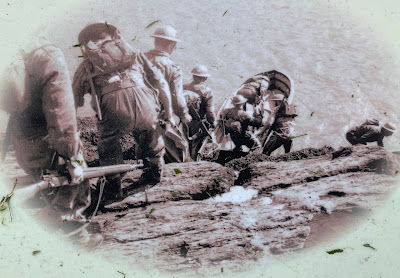 Above: British troops training in the Woolacombe area

To facilitate training, a number of training aids had to be constructed, and the remains of these are the focus of this blog. Perhaps the best known remains can be found in the dunes of Braunton Burrows; these are the concrete mock landing craft. A number of these were built to enable dryshod training in loading and unloading landing craft and the remains of eight of these can still be found (six Landing Craft Tank (LCT) and two Landing Craft Vehicle and Personnel (LCVP). 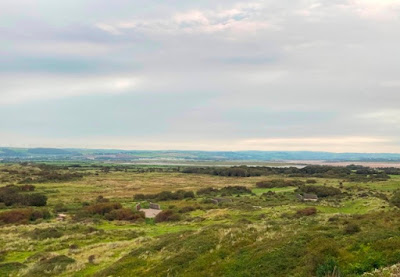 
The LCTs were built as a mock up of LCT Mk V, but were extended at the rear when it became known that the MKVI would also be used. On the extension of one of the LCT’s, an inscription reading ‘146th Eng, Co C, 1st Platoon’ can be seen, telling us who added the extensions at least.  The concrete mocks consist of the deck, walls representing the front of the craft and the ramp. The rest of the LCT walls were represented by steel poles to support corrugated iron sides, and the bases of the supporting steel posts are still visible. Metal loops can also be seen where troops could have practiced lashing down vehicles. The mock LCVP consist simply of the deck and ramp. 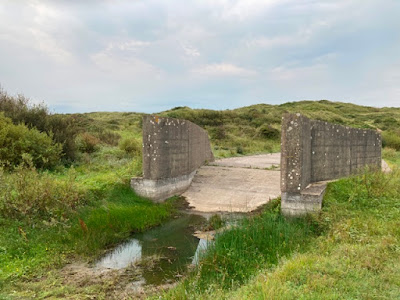 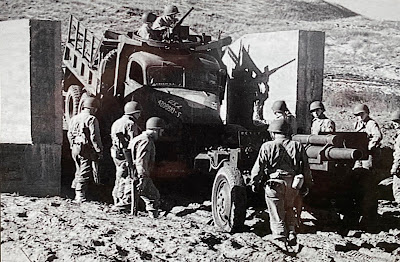 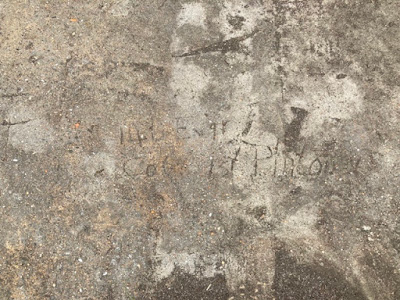 Above: Top - one of the mock LCT.  Middle - practicing unloading dryshod. Bottom - inscription written into the concrete extension of one of the LCT. 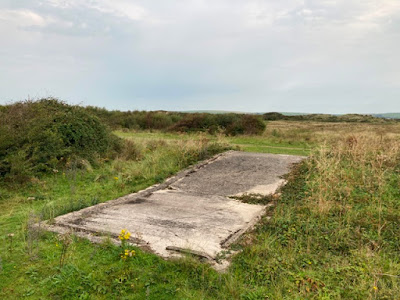 Above: one of the mock LCVP.


The other impressive training aid that remains in the dunes is the ‘rocket wall’, a large concrete wall used for target practice by troops firing the M1 Rocket Launcher – commonly known as the Bazooka. This was an integral weapon of the Infantry Assault Team (IAT). The IAT was an innovation of the ATC, formed by nominally reorganising the assault battalion into three assault companies which were in turn made up of two assault sections or IATs. The reason for this innovation was that the IAT, made up of 30 men, fitted into a LCVP and thus could be landed as an intact  team. The IAT had the task of the reduction of pillboxes forming the initial defences. The Bazooka was the perfect weapon at close range, giving direct fire support against the pillbox loopholes as the demolition team moved in. The rocket wall was painted with squares, representing loopholes at which troops could practice their aim against at ranges of 50 to 75 yards. 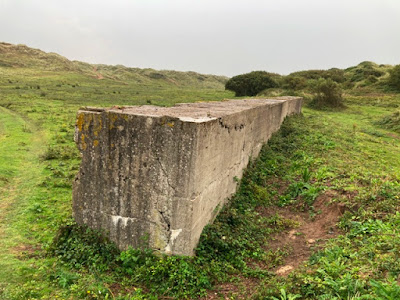 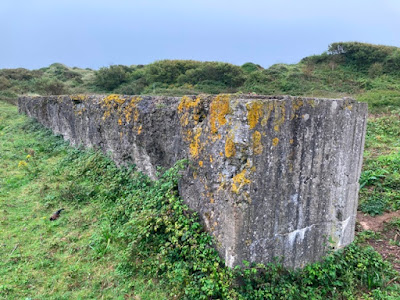 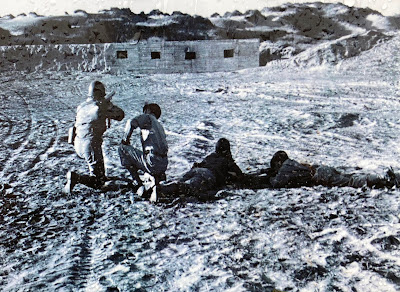 Although I did not have time for a full explore of the dunes, I did come across other concrete remains. Their purpose is uncertain, although some may have been mock pillboxes on which troops practiced attacking. If that is the case, their walls are a lot thinner than those found at nearby Baggy Point. 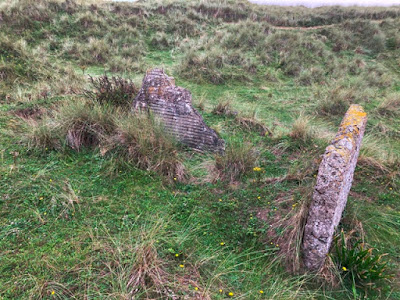 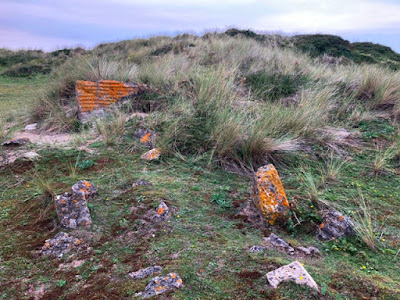 Above: Remains of two other concrete structures in the dunes. I am sure a full search would have turned up more traces of the ATC.

Baggy Point was incorporated into the ATC for use in practicing the company assault, as it was found that the leap from individual and IAT training to a full scale battalion exercise was too great. To enable this training, further training aids were constructed in the form of mock pillboxes. At the point of the headland, a mock German strongpoint was constructed, consisting of at least three large mock pillboxes enclosed by the boundary hedge bank.  In the rear of these the mock pillboxes are much simpler, consisting of just a concrete wall with a sculptured embrasure. Only the mock pillboxes within the strongpoint at the point of the headland seem to have been subject to live fire; the other mock pillboxes are in good condition. A further mock pillbox can be found overlooking Croyde Bay. 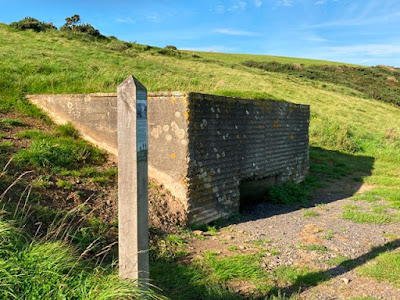 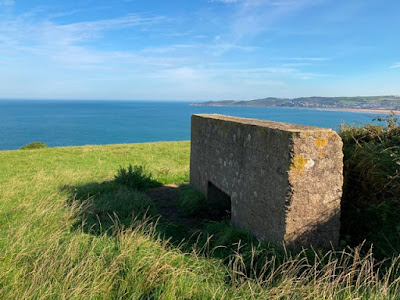 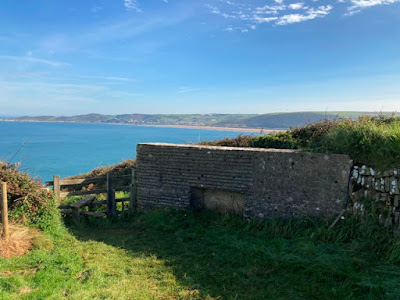 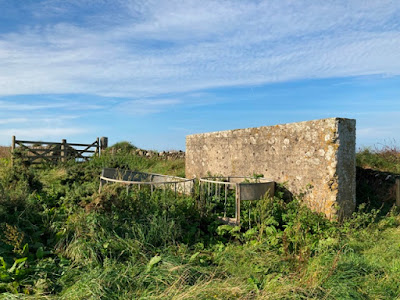 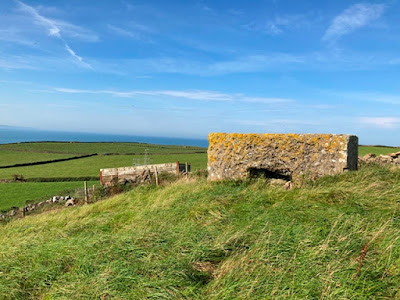 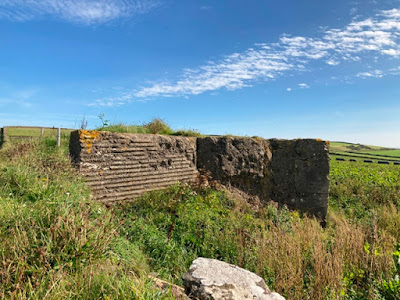 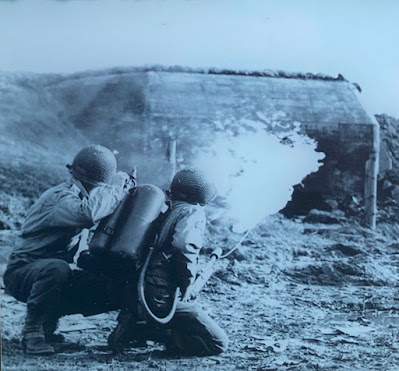 Above: Some of the mock pillboxes at Baggy Point. They very from simple walls to more substantial structures. Last image shows the troops practicing attacking a pillbox with a flamethrower. The two-man flamethrower team was part of the 30 strong IAT. 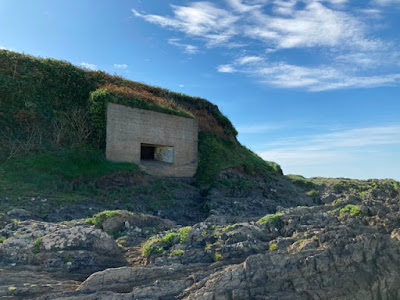 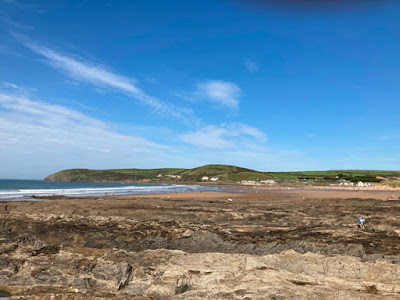 Above: Top - The mock pillbox at Croyde Bay. Bottom - the view from the pillbox overlooking Croyde Bay with Baggy Point in the background.

As well as the ATC, the area was also used as a bombing range for Wellington bombers to practice attacking U-boats. A floating target was moored off Morte Bay; bombers approached low over Putsborough, with a concrete arrow pointing towards the target. Three observation posts could check on the accuracy of the bombing by triangulation. Today, two of the observation posts and the concrete arrow still exist. 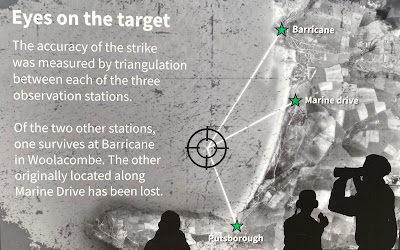 Above: How the the bombing range worked. 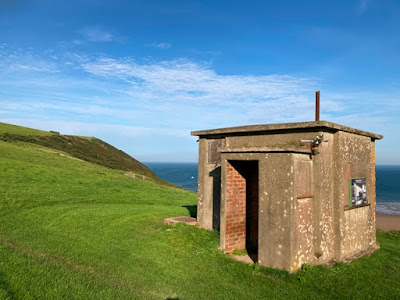 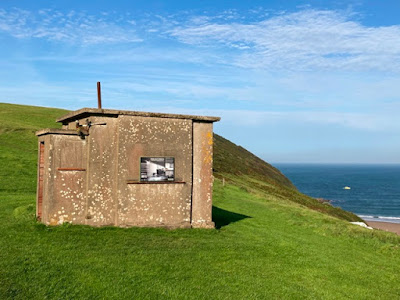 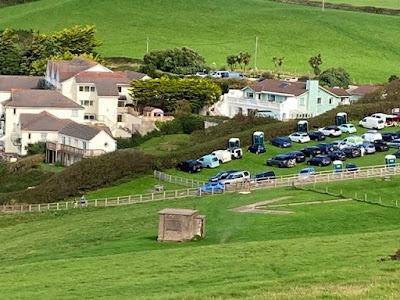 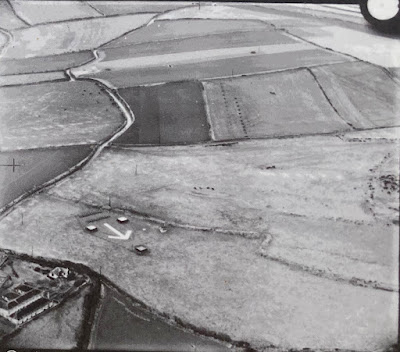 Above: The observation post at Putsborough; note the concrete arrow in the third image down. Bottom  image is a war time aerial photo. 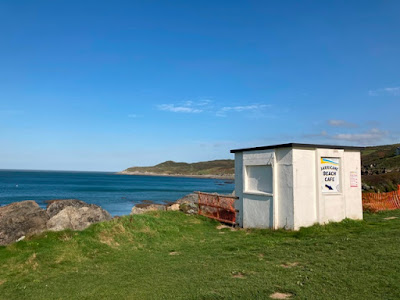 Above: The other surviving observation post at Barricane Bay.

The area also had a role in the battle against enemy ships and submarines in the Great War, when a Coastguard watch point was established at Morte Point. It was demolished in 1982, but a plaque has been erected on its former site, and the views from here are fantastic. 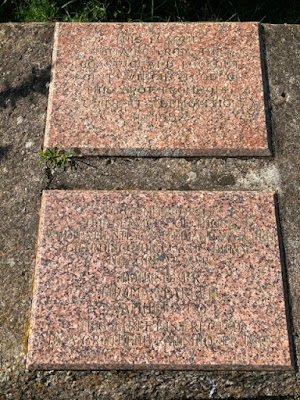 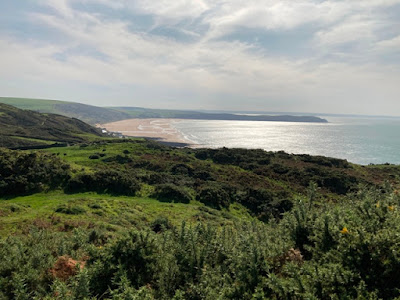 Above: Top - memorial plaque at the site of the WW1 Coastguard lookout. Bottom - the view from the lookout, with Woolacombe Bay and Baggy Point in the distance.

All in all, a fascinating place. The whole topic of ‘Driving the Germans out of their Concrete Emplacements in Western Europe’ is my next area of my focus after Building the Gort Line, and who knows, perhaps a second book!