Spent a pleasant Monday last week mapping the anti-landing trenches at Westleton Walks. These trenches are unusual compared to those I've mapped to date. Although laid out in the grid pattern, they have been dug in two forms: 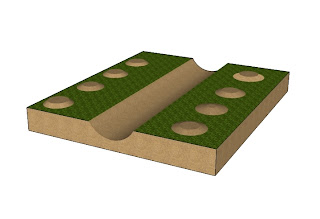 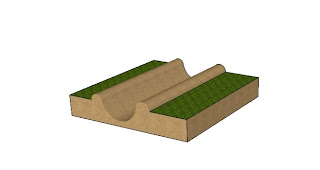 Above: Google sketchup representations of anti-landing ditches. Top is typical with soil in heaps set back from the trench. Bottom shows the spoil placed in 'lips' - the first time I've come across this.
In one stretch of  trench, it changes from spoil in heaps to a lip mid way. In another stretch, the lip is only one one side for part of the trench, with a much shallower depth of  trench along this section. 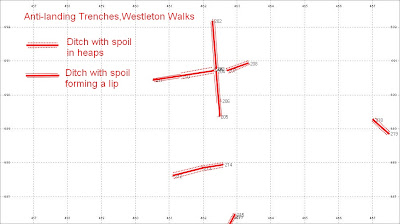 Above: GPS map of anti-landing trenches, Westleton Walks
I have an aerial photo of these trenches taken in 1946 (not sure of copyright so cannot post it) and it clearly shows the ditches in this form at least at the end of the War. My only thoughts so far to explain the above is that possibly the usual form (spoil in heaps) was dug by excavator while the spoil in lips sections dug by hand. Maybe the short section with a lip on only one side was never completed (or possibly part in-filled from one side post War?).
The aerial photo also sadly  shows that these are only partial remains of the anti-landing obstacles. I did come across shallow depressions which I thought at the time may be in-filled ditches - will have to go back at some point and map these and over lay them on the aerial photo to be sure.
After mapping the ditches, a little explore revealed a typical 6'x2' slit trench and 6'x4' weapons-pit along with a few bits of angle iron and the remains of a 4" mortar round. Also many circular depressions, probably shell holes. The aerial photo also shows what appear to be shell holes. These are the first positive remains I've found for training in this particular area of Westleton Walks to date.
Below:
Image 1: Anti-landing ditch with spoil placed in 'lips'
Image 2: Anti-landing trench with spoil placed in mounds
Image 3: Section of trench which changes from spoil in 'lips' to spoil in mounds mid way along its length
Image 4: Section of anti-landing trench with two bits of angle iron nearby
Image 5: Remains of 4" mortar round 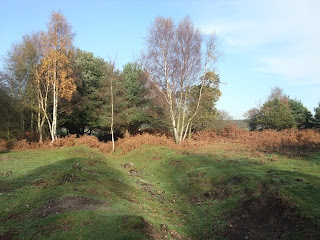 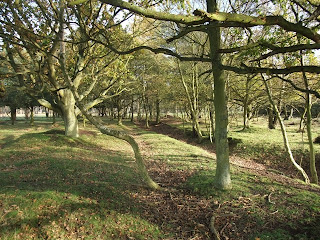 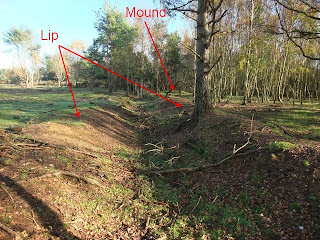 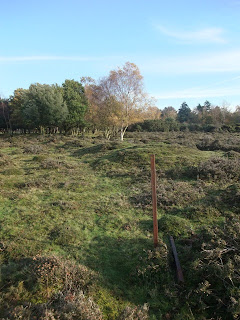 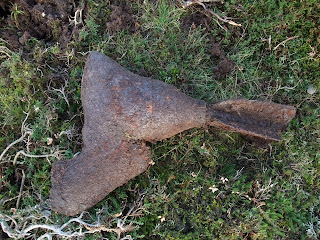