Although the individual War Diaries of Home Forces contain frequent reference to training exercises and demonstrations, it's rare that a full record exists. Mostly it's just the aims of the exercise. The records of one exercise that I've already mentioned (Exercise Kruschen) contain aims of the exercise as well as a detailed summary of findings but sadly the maps are missing. The records that remain of the exercise which is the subject of this blog contain aims and a good map (including the 'echelon' barrage trace - more on this on a later blog). The area on which the demonstration took place has changed little from 1942 (a bit more forest cover) and is  freely accessible so it makes a good study. I think that this exercise should be viewed in conjunction with Kruschen (and later exercises held by 79th Armoured Division - the beginning of planning for 'D' Day and dealing with German defences which troops would have to face).
The aim of the demonstration was to show some of the methods  to deal with obstacles that would face troops in battle. The demonstration was supposed to show an attack on a brigade front but difficulties in getting enough tanks and ammunition shortages limited the demonstration to a one battalion front, with  'imaginary' troops and obstacles on the flanks.
The obstacles to be tackled were:
These obstacles were prepared by 591 Field Company. In addition an enclosure was constructed for those to attend the demonstration.  Perhaps the importance of this exercise can be judged from the fact that a second anti-tank ditch was constructed (to the north of the demonstration site) for troops taking part to practise on.
Last Sunday I visited the site. The anti-tank ditch still exists, (along with some anti-landing trenches) and good views can be had of the 'battlefield'.  In future blogs I hope to concentrate on individual details of the demonstration as well as some photos of the site today.
Image 1: Sketch of demonstration site (with barrage trace)
Image 2: Sketch imposed on Google Earth
Image 3: Aerial photo of site in 1945. Tracks / disturbed ground clearly show the level of armoured fighting vehicle training in the area although most is probably related to training by 79th Armoured Division from 1943 onwards.
Image 4: GPS of remains found to date - the anti-tank ditch (and a section of anti-landing trenches) 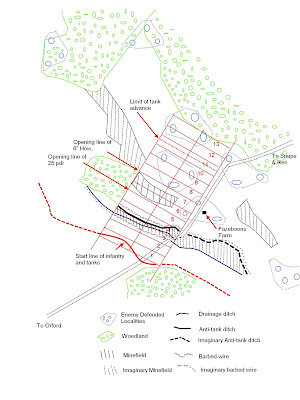 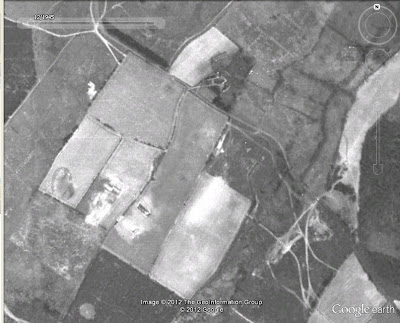 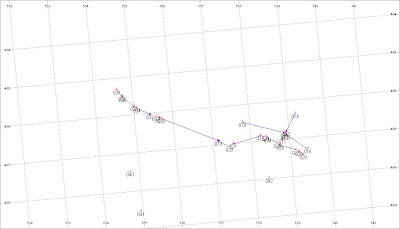