Strong NE winds continue to erode a part of the cliffs at Thorpeness revealing more WW2 remains. Previously on this blog I mentioned the last time we had a prolonged period of strong winds, some eroded dragons teeth were revealed. In the latest burst of erosion even more are now showing. Also a block of concrete from the toppled pillbox revealed some writing - clearly visible are traces of a number followed by 'Coy RE'. As 558 Field Coy designed and oversaw the construction of this style of pillbox it must surely relate to them - see attached pic of the 'reconstructed' writing.
However the most unusual and puzzling find was a small cartridge id by folks on WW2 Talk (any questions you have on WW2, just post on this forum and you will get an answer!) as being from the United States M1 Carbine (calibre .30 inch).  Getting my calipers out I can confirm the measurements are spot on. The cartridge is dated 1943 and the manufacture stamp 'C', relates to Lake City. This was a US Government factory and began manufacturing the .30 carbine cartridge in 1941. I am unaware of any US troops in the area during the war (nearest I can think of is the large US camp at Fritton, Norfolk). I have found a reference to the British testing the carbine as a possible replacement for the Lee Enfield but such trials would not have been held at Thorpeness! So what it is doing here is a mystery - if anyone reading this blog has any info please leave a comment!
9th Kings Defence scheme now on the website (under 55th Division).
Image 1: WW2 decay on Thorpeness beach
Image 2: Remains of a 'dragons tooth', under the toppled pillbox
Image 3: One half of a pre cast embrasure
Image 4: 'Reconstructed' 558 Coy RE
Image 5: The M1 .30 calibre cartridge (left) with a 9mm for comparison
Image 6: The US M1 Carbine and clip of ammo  (Author: Curiosandrelics) 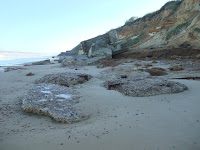 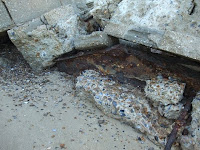 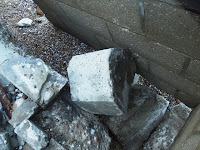 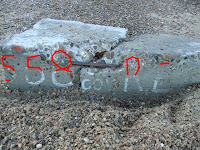 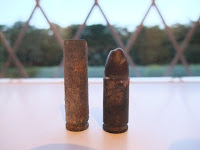