A strange title for this blog, about a walk in the Benacre / Kessingland area I  admit! So I better explain it! Today (Mon 10th May) decided to check this area to see if coastal erosion that I have already bloged on re Thorpeness had revealed any fresh 'finds' in this area, one of the quickest eroding sections of the Suffolk Coast. In particular I was interested in any visible evidence of Covehithe Emergency Coastal Battery. Also on my recent visit to the NMR Centre in Swindon I had recorded some aerial photos showing buildings in this area in 1940/41 (no idea at the moment if they are military or not). Covehithe Cliffs have eroded markedly since the war so any evidence was going to be along the tide line. All I could find weres many remains of sewage systems! These did resemble some of the remains I have found in camps (eg HAA Battery camps) still surviving. One pipe was manufactured by H R Mansfield, Church Gresley. Church Gresley is in Darbyshire, 15 miles from Darby and 6 miles from Ashby-de-la Zouch. From a Google search I was able to trace H R Mansfield Sanitary Pipe Works from 1895 to 1945! Of course I have no idea if the sewer system remains on the beach are from military buildings or not, but the complete lack of other building remains would suggest the buildings themselves were dismantled, just leaving the underground sewer in place. Subsequently, cliff erosion has resulted in depositing the sewer system on the beach. This would make sense, for example, with emergency coastal batteries, many of which were scheduled for removal at the end of the war.

Not really a website update, but have added a couple of interesting snippets to Defence Works - Minefields-Buildings in Defence on the site.
Hopefully, a less off-beat post tomorrow!
Image 1: A complete manhole from a sewer, Benacre/Covehithe Beach
Image 2: Sewer Pipe, manufactured by H R Mansfield, Church Gresley 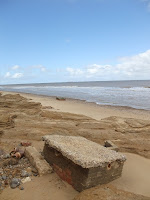 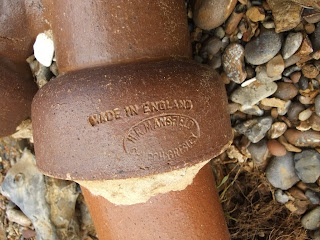