Firstly in memory to all those involved in 'The Miracle of Dunkirk' including the often forgotten men who formed the rear guard and fought until killed or captured, allowing the evacuation to be successful. They will not be forgotten.
A visit to Bawdsey Beach at low tide (Mon 17th) revealed the remains of various anti-landing obstacles, also two pillboxes (will post on these on a future blog). I assume that the concrete blocks and iron were used to anchor naval Z1 scaffolding.  The iron uprights were constructed of both angle iron and RSJ's, and all have four holes approx 13/4" diameter. The blocks were anchored into the sand with the angle iron/RSJ projecting from the bottom of the concrete block as well as four 3/4" round metal rods. The current location of the blocks is certainly at half tide level. See attached Sketchup diagram for full measurements.
Above the high tide level (although for how long!!!) are the remains of some scaffolding. Next post will include some details on 'Dragons Teeth' and concrete 'A' frames which I have no idea what they were for.
Photos 1 to 3 - concrete blocks with angle iron / RSJ's
Photo 4 - Sketchup of one of these blocks
Photo 5 - remains of scaffolding. 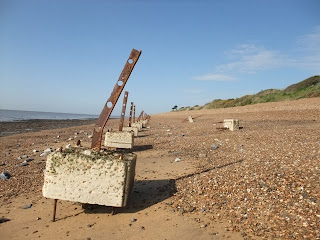 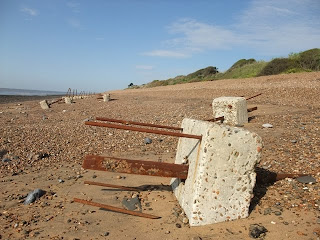 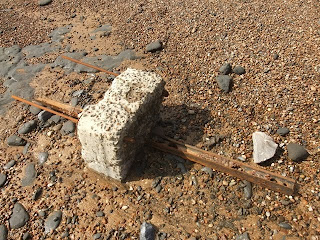 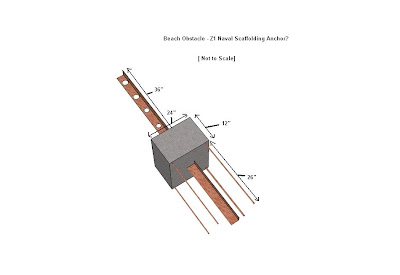 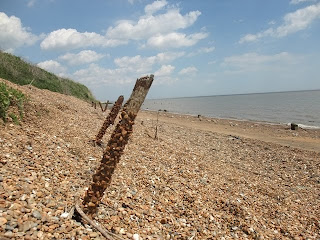